Mail to Czechoslovakia rejected because of stamps 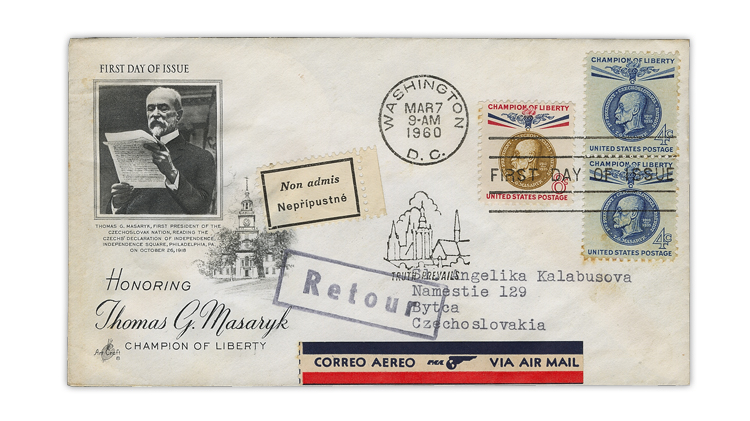 The presence of the Champions of Liberty stamps honoring Thomas Masaryk doomed this 1960 first-day cover to being rejected for delivery by the pro-communist administration of Czechoslovakia.

My father, Howard Hotchner, was an executive of the United States Office of War Information during World War II and of its successor agency, the Voice of America. In addition, as a serious philatelist, he was a co-founder with his colleague Hank Miller of the VOA Stamp Club.

In my teenage years, I spent many hours helping him handle audience mail. This included sending VOA program schedules and occasional philatelic gifts to members of the stamp club who wrote in from around the world to report on shortwave reception quality and often declare their affection for the United States.

Some countries were sensitive about the subject of the U.S. stamps that were affixed to mail from the United States.

The first president of a free Czechoslovakia (in office 1918-35), Masaryk was a symbol of independence to Czechs after World War II. That made him an object for revisionist history during the postwar era as the communists loyal to Moscow took and exercised power throughout Eastern Europe.

Philatelic evidence of this is shown on the pictured Masaryk FDC. It was considered inadmissible and returned because mail with those stamps was rejected by the Czech government authorities.

To read the rest of this column and learn why a second cover was returned to sender, subscribe to Linn’s Stamp News.