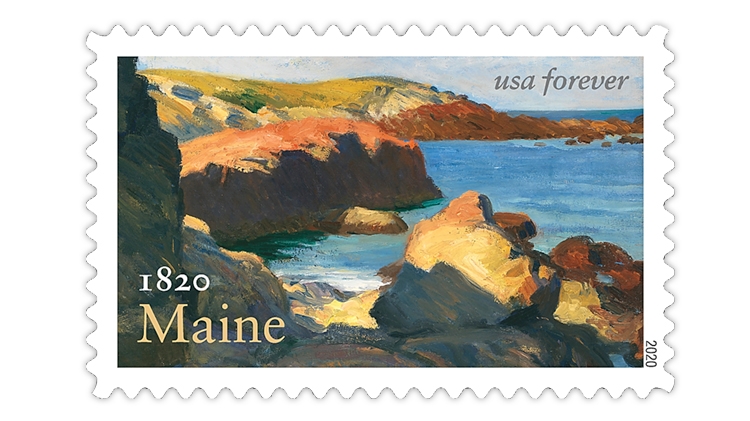 A forever stamp celebrating 200 years of statehood for Maine will be issued March 15 in Augusta. The design features a 1914 Edward Hopper painting of the Maine coastline. 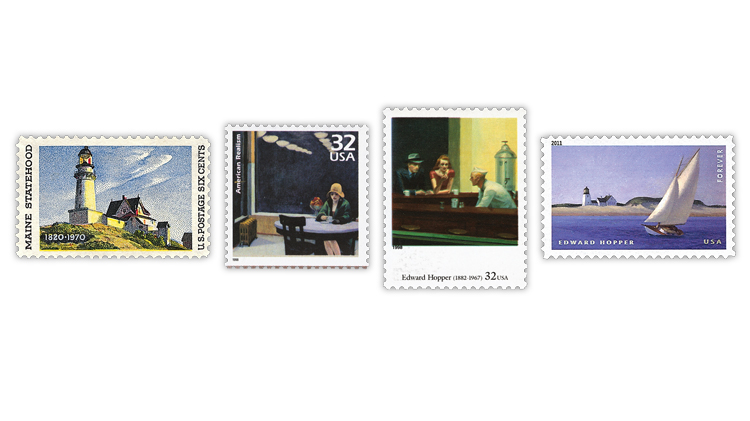 The first United States stamp showing an Edward Hopper painting commemorated Maine statehood on its 150th anniversary in 1970. Three other Hopper paintings have since appeared on U.S. stamps. 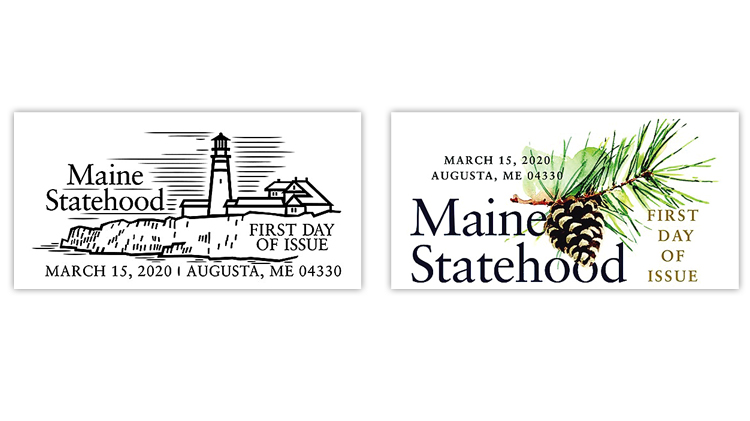 The United States Postal Service will issue a new commemorative forever stamp March 15 to mark the bicentennial of Maine statehood. And for the second time, a painting by celebrated American artist Edward Hopper has been chosen to represent the state in the stamp design.

The Sunday issue date is a change from the March 14 issue date previously reported.

The new March 15 date lands exactly on the state’s 200th anniversary. On March 15, 1820, Maine became the 23rd state to be admitted into the Union.

The first-day ceremony, according to information posted on the USPS website, will take place at 1 p.m. Sunday at the Augusta Armory, 179 Western Ave., Augusta, Maine.

“Maine Historical Society is helping lead a participatory statewide commemoration of Maine’s Bicentennial (1820-2020) that will celebrate Maine, explore how 13,000 years of history shape the state today, and support efforts to prepare Maine for the future,” the web page explains.

Anyone planning to attend the event can register in advance at the same web page.

The design of the nondenominated (55¢) Maine Statehood stamp features Edward Hopper’s 1914 oil-on-canvas painting Sea at Ogunquit, from the collection of the Whitney Museum of American Art in New York City.

USPS art director Derry Noyes designed the stamp, which will be issued in panes of 20. Ashton Potter printed the stamps by offset lithography.

The inscriptions on the stamp read “1820 Maine” in the lower left corner, and “usa forever” at upper right.

The state of Maine was created out of the Commonwealth of Massachusetts, which lost more than 30,000 square miles of land as a result.

“Following the Revolution, frontier settlers who resented being ruled from Boston pressed for separation from Massachusetts.

“Coastal merchants, who held the balance of political power at the time, resisted the separation movement until the War of 1812 showed that Massachusetts was unable or unwilling to provide adequate protection for the people of the district against British raids.

Statehood for Maine, however, would bring about an imbalance in the number of slave states versus free states, which had been evenly matched at 11 each.

“In an effort to preserve the balance of power in Congress between slave and free states, the Missouri Compromise was passed in 1820 admitting Missouri as a slave state and Maine as a free state,” according to the Library of Congress.

“Overwhelmingly against slavery by 1820, most Mainers looked at the Missouri Compromise with anger,” according to the Maine Historical Society. “Yet for those who were involved in the struggle for separation for nearly 40 years, they were hesitant to let their greatest opportunity fail.”

Located in the extreme northeastern United States, Maine today is home to 1.3 million people and covers 35,380 square miles, making it the 39th largest U.S. state by territory. It borders New Hampshire to the southwest, and the Canadian provinces of Quebec to the northwest and New Brunswick to the northeast.

Though a native of New York, Edward Hopper (1882-1967) summered in Maine nine times between 1914 and 1929, painting and sketching in various locations, according to information from the Bowdoin College Museum of Art in Brunswick, Maine.

“While Hopper returned to Ogunquit during the summers of 1915, 1928 and 1933, it was during the summer of 1914 that he produced his best-known and most important Ogunquit-related paintings,” according to information published in 2005 by Antiques and the Arts Weekly.

To fit the standard commemorative format, the Hopper painting on the new stamp is cropped across the top, eliminating much of the cloud-filled sky above the rocky shoreline.

The only other U.S. stamp to commemorate Maine Statehood was issued 50 years ago on July 9, 1970, marking the 150th anniversary.

The design on that 6¢ stamp (Scott 1391) reproduces another Hopper oil painting, The Lighthouse at Two Lights, from 1929.

Three other Hopper paintings have appeared on U.S. stamps.

The 1927 oil-on-canvas Automat was featured on a Celebrate the Century stamp issued May 29, 1998 (Scott 3184n). The 32¢ stamp is captioned “American Realism,” and the use of the painting represents that period of art in the 1920s.

Just three months later, on Aug. 27, 1998, a detail from Hopper’s most famous painting, Nighthawks, was shown on a 32¢ stamp in the American Art set (Scott 3236p). The dominant scene in the 1942 oil painting is an exterior view of four individuals inside a brightly lit diner at night.

A tribute to Hopper was featured on a nondenominated (44¢) forever stamp issued Aug. 24, 2011, in the American Treasures series (Scott 4558). Issued in panes of 20, the stamp reproduces The Long Leg, a 1935 painting of a sailboat off the coast of Provincetown, Mass.

Two pictorial first-day cancels have been prepared for the Maine Statehood stamp and will be used on first-day covers prepared and sold by the Postal Service.

The black postmark shows a line drawing of a lighthouse and adjacent structures above a cliff along the shoreline.

The color postmark shows a bit of a pine branch and a single pine cone, a tribute to Maine’s nickname as the Pine Tree State.