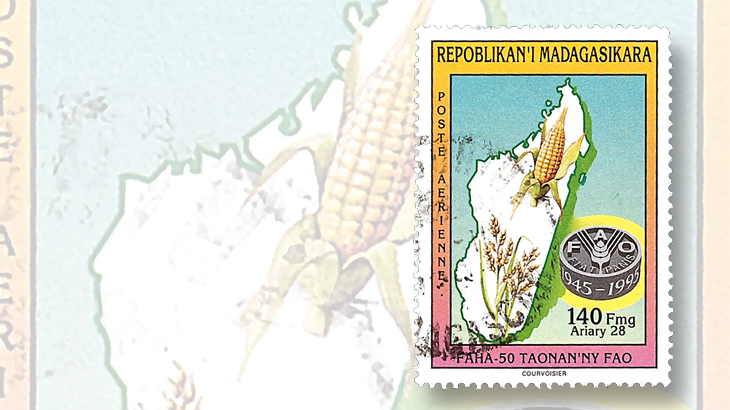 This former French colony, lying off the southeast coast of Africa in the Indian Ocean, occupies the fourth largest island in the world. Although the name of the country was officially changed from Malagasy Republic to the Democratic Republic of Madagascar in 1975 and to the Republic of Madagascar in 1993, stamps issued since those dates are still listed under Malagasy Republic in the 2016 Scott Standard Postage Stamp Catalogue.

Madagascar boasts a huge number of animal and plant species found nowhere else. Humans did not permanently settle the island until about the 4th century B.C. The first wave of settlers came from Borneo. Subsequently, Arabs from Arabia and Bantus from southeastern Africa arrived before 1000.

As an independent country, Madagascar has had a relatively robust stamp-issuing policy, with many colorful topical issues aimed primarily at collectors. One issue that was not widely advertised was a set of two 1995 airmail stamps commemorating the 50th anniversary of FAO (Food and Agriculture Organization) of the United Nations (Scott C200B-C200C). Catalog editors and collectors generally only became aware of the issue long after the fact when used examples began showing up in kiloware mixtures.

The Scott Standard catalog does not value the individual stamps in any condition. It does value the set of two in mint never-hinged condition at $125. That is probably a good price, but these stamps are truly scarce. Few if any dealers have them on offer. Keep your eyes open for them as you sort kiloware or browse collections and accumulations. You might get lucky.