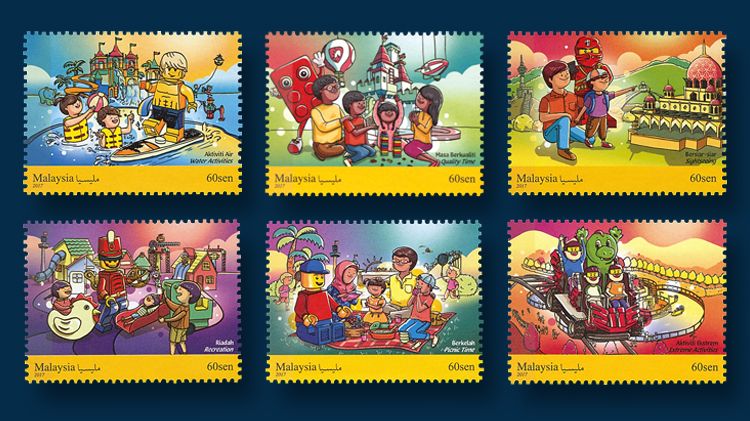 Finding a philatelic way to bridge a generational gap can sometimes be difficult, or it can be easy depending on the stamp’s subject.

For instance, Malaysia issued six stamps featuring Legos and children’s holiday activities Dec. 4, 2017, in conjunction with Stamp Week. These building bricks remain popular more than 80 years after the Lego Group was founded in Denmark in 1932. The company launched the plastic Lego brick in its present form 60 years ago, in 1958. The first Legoland theme park opened in Denmark 10 years later.

The sixth Legoland theme park, Legoland Malaysia, celebrated its fifth anniversary in 2017. Other Legolands are located in England, Germany, Dubai, Japan, and the United States (California and Florida).

The six Malaysian stamps, each denominated 60 sen, are se-tenant (side-by-side) in a pane of 36. In addition, the stamps were issued in separate panes of 10 with a large selvage showing scenes of Legoland Malaysia.

The stamps depict Legoland characters, and children and their families engaged in various activities. Inscriptions on the stamps describe these as quality time, water activities, picnic time, sightseeing, extreme activities and recreation. The surfer shown on one stamp and the toy solider on another are similar to Lego figures that have been sold by the Lego Group.

Combining a set of these stamps, or other Lego stamps, with a set of Lego bricks can make an excellent gift for a child.

For reference, Denmark, the Isle of Man and Sweden have issued Lego-related stamps. Two of these stamps are part of the 1989 Europa series featuring children’s toys: A Danish stamp depicts two red two-by-four bricks (Scott 871), and a stamp from the Isle of Man shows a boy building a fort using what appear to be Lego bricks (397).