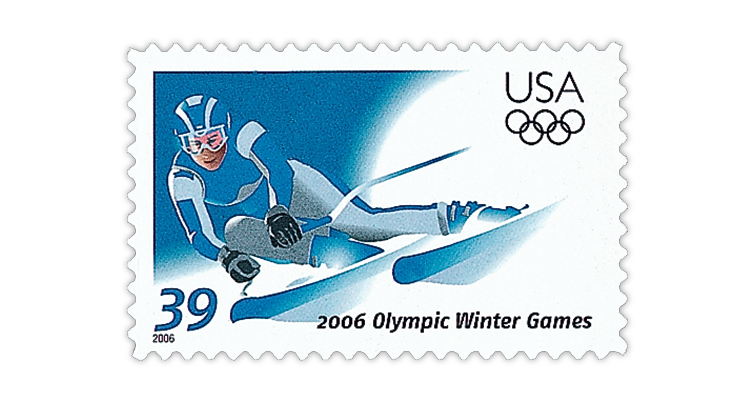 The cartoon caption contest image for March is the 2006 39¢ Winter Olympics stamp featuring a female skier representing the more than 200 United States athletes who participated in the Torino Olympics. Entries must be received by March 25 for a chance to

The Beijing 2022 Winter Olympics promised to provide sporting thrills during the Games and political fireworks before them. As this is written before the Games took place, I expect there may be some things that happened apart from competitions that may be worthy of note.

Given that it is a single stamp where most other U.S. Olympic issues included more stamps, it may have left an impression that the United States was less than enthusiastic. I think the real reason for only one stamp was that the U.S. Postal Service was gearing up for its massive participation in the Washington 2006 world philatelic exhibition to be held a few months later.

That show saw the release of three multi-stamp issues, including two souvenir sheets and the pane of 40 Wonders of America stamps. Also released at the show was a joint issue with Canada marking the 400th anniversary of the 1606 voyage of Samuel de Champlain with a stamp and souvenir sheet.

So the female skier on the contest stamp had to represent the wide variety of sports and U.S. athletes who participated in the 2006 Winter Games.

What was she thinking or saying as she sped down the course? That is yours to determine and suggest. Your task is to imagine yourself in the precarious position pictured and to come up with a line about her participation; her sport; anything else germane to the Olympics, to stamp collecting, to politics; or whatever else comes to mind.

Entries must reach me no later than March 25.