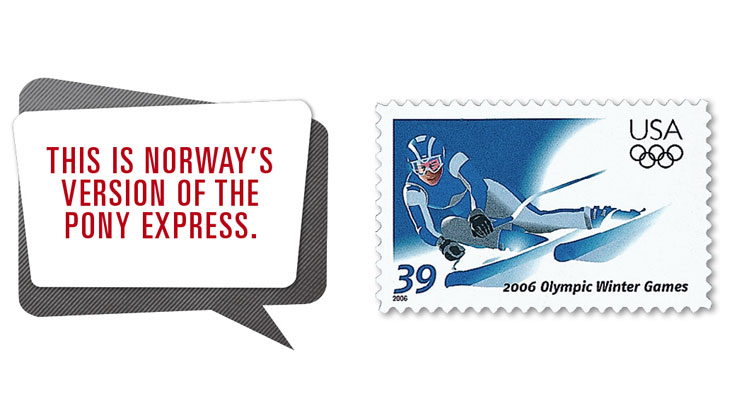 The winner of the philatelic part of the March cartoon caption contest featuring the 2006 39¢ Winter Olympics stamp is Marvin Levine of Appleton, Wis., who compares mail delivery systems in different parts of the world based on weather. The next U.S. Stam

Perhaps because there was a shorter period for entries in the March cartoon caption contest, it drew only about one-third of the usual responses.

Still, there were some good ones, so I will present an abbreviated report.

The dominant theme for a comment by the skier on the stamp was stamp collecting, represented by “While my sport has me going downhill, collecting stamps makes me feel like an Olympian” sent by Jerry Smith of St. Charles, Mo.

Otherwise the entries were diverse — all over the map, one might say. In that spirit, the winner of the best philatelic line, Marvin Levine of Appleton, Wis., compares mail delivery practices in different parts of the world. The line is shown in the illustrated box.

On the nonphilatelic side, the winner is Steve Kotler of San Francisco, Calif., who engages in a bit of wordplay with “If I signed an endorsement for ski fasteners, would that be a binding contract?”

“Hmmmm … Did I turn off the oven?” by Rich Wolf of Westminster, Md.

“Why did they have to put a mailbox in the middle of this course?” from David Cohen of Rockville, Md.

“Maybe I should have checked the avalanche forecast first!” sent by Dave Schwartz of Commack, N.Y.

“Get back! I’m carrying Express Mail” from Clyde Holt III of Ketchum, Idaho.

“Why yes, my political views do have me leaning to the right!” by Steve Kotler.

Thanks and a tip of the hat to all who entered. The next contest will be announced in the May 9 issue of Linn’s.