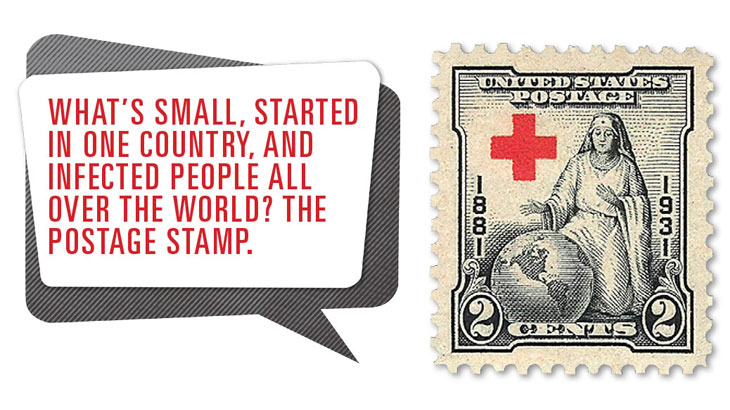 The stamp is the 1931 2¢ commemorative that marks the 50th anniversary of the American Red Cross (Scott 702).

Entries on the serious side included the following:

“Nurses put their stamp on the world every day,” by Rich Wolf of Westminster, Md.;

“I can’t do this by myself. Please volunteer to help,” sent by Laura and Tom Tomaszek of Cedar Rapids, Iowa.

A contemporary scientific question also drew several entries, both pro and con. Rather than risk being accused of taking sides, I will share a representative line for this group: “This novelty space heater gives new meaning to the term ‘Global Warming’!” It was contributed by Steve Kotler of San Francisco, Calif.

The third most popular theme for this contest focused on the red cross on the stamp, a feature that is often seen misregistered high, low or sideways because it was added by a second press pass. Mike Cooper looked at the near-perfect example shown here and in the contest announcement and suggested, “Thanks for at least getting the red cross in the right place.”

On the philatelic side of the contest, the winning entry from Jesse Hykes of New Fairfield, Conn., supplied a surprise ending worthy of O. Henry.

The nonphilatelic line winner submitted by J. Dale Shively of San Marcos, Texas, is “My word! It looks like the U.S. is in the middle of another presidential election season. … I’ll need to send for back-up!”

“And on the seventh day, She rested. … ” from Rick Howell of Bedford, Texas.

“Thank God, I finally found where that treasure is buried,” by Ray Weinstein of Woodbridge, Va.

“Clarence is on vacation this week, so it’s my turn to give someone a wonderful life,” from David Vikan of Dickinson, N.D.

“Now keep an eye on the spinning ball. Concentrate … concentrate… .” by Dave Schwartz of Commack, N.Y.

“Whoa! How am I supposed to bowl this thing? There are no finger holes!” from Michael Tremel of Leland, N.C.

Thanks and a tip of the hat to all who entered. The next contest will be announced in the May 11 issue of Linn’s.