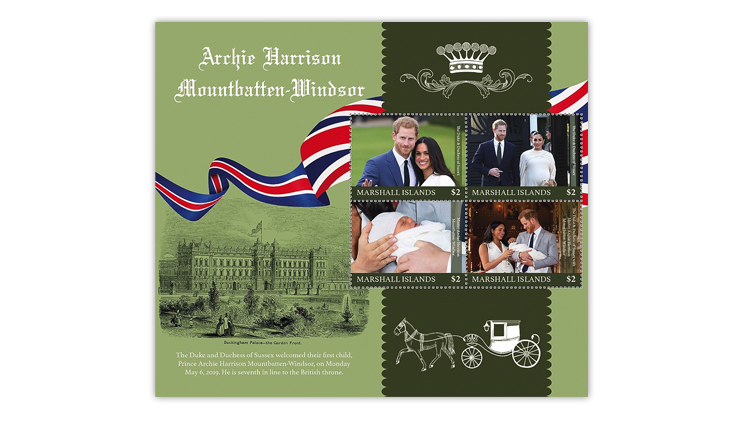 The Marshall Islands will be the first country to issue stamps celebrating the birth of Archie Harrison Mountbatten-Windsor, son of Prince Harry and Meghan Markle, according to a May 14 announcement from its philatelic agency, Inter-Governmental Philatelic Corp.

A day later, IGPC reported that Liberia would be the second country to issue stamps welcoming the royal baby.

The planned issue dates are June 19 for the Marshall Islands, and June 29 for Liberia.

The seventh in line to the British throne, Archie was born at 5:26 a.m. May 6, weighing 7 pounds and 3 ounces.

The stamps in the souvenir sheet from the Marshall Islands are each denominated $2.

The top two stamps show photographs of Prince Harry and Meghan, the Duke and Duchess of Sussex: an engagement photo and a photo taken their late February visit to Morocco.

The bottom two stamps focus on two-day-old Archie’s presentation to the public May 8 at St. George’s Hall in Windsor Castle.

In The New York Times report on the occasion, Ellen Berry wrote, “As the first multiracial, half-American child born in the top echelons of the royal family, he has come to signify, for many, the monarchy’s progression into a more modern, inclusive era.”

Only one of the four $400 stamps in the souvenir sheet from Liberia pictures Archie with his parents. Similar scenes of royal babies with their parents are shown on the other stamps: the future Queen Elizabeth II in 1926 with the Duke and Duchess of York (later King George and Queen Elizabeth the Queen Mother), Prince Harry in 1984 with Prince Charles and Princess Diana, and Prince George in 2013 with the Duke and Duchess of Cambridge (Prince William and Kate Middleton).

The stamps were designed by the IGPC Art Department and printed by offset lithography. The IGPC website is www.IGPC.com.