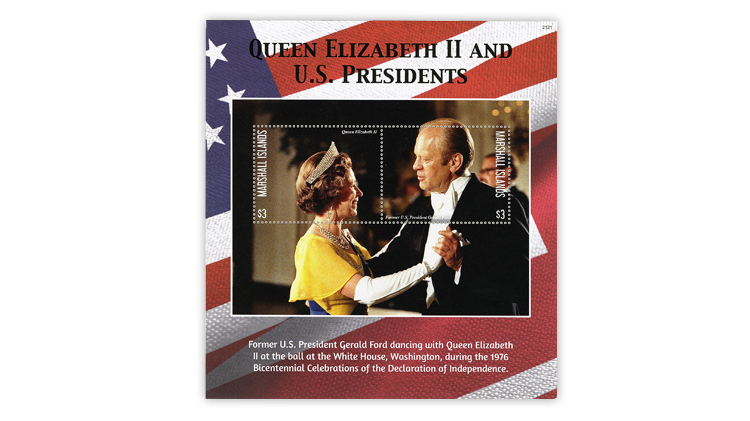 During her 70-year reign (the longest of any British monarch), Queen Elizabeth II has been honored on countless postage stamps from around the world.

The Marshall Islands, a former United States trust territory in the Pacific, issued a set of 13 souvenir sheets celebrating the meetings of Queen Elizabeth II and 13 different United States presidents.

The new-issue agency Inter-Governmental Philatelic Corp. announced the souvenir sheets in a March 1 press release. No release date for the sheets was given in that press release. However similar sheets are pictured on the IGPC website, listed with an Aug. 24, 2021, issue date.

The photographs feature notable meetings from the past several decades. One souvenir sheet shows the queen dancing with President Gerald Ford.

Another sheet shows both the queen and President Ronald Reagan on horseback. Text in the selvage explains that both leaders shared a love of horseback riding.

The only president not included in this issue is President Lyndon B. Johnson, who served from 1963-69.

The IGPC graphic design department, led by Lucy Yuan, designed the stamps. The photographs were obtained under license from Getty Images.