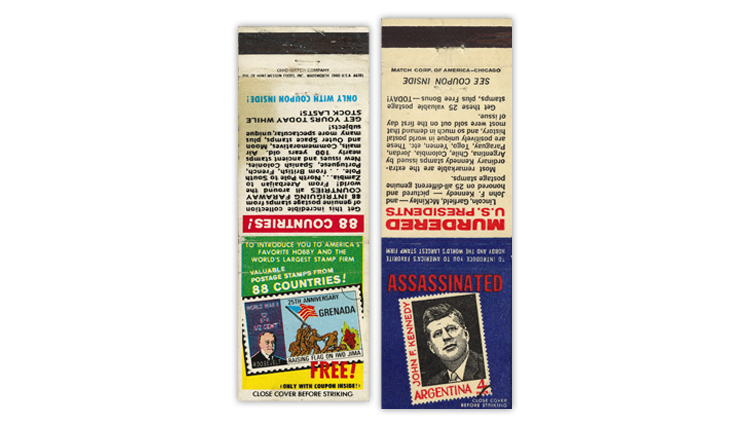 Figure 1. The precipitous decline in smoking together with the thumb-activated cigarette lighter have made matchbooks almost obsolete. But for 60 years from the 1930s until the 1990s, they included advertisements related to stamps and stamp collecting. The two matchbook covers shown feature offers of stamps. 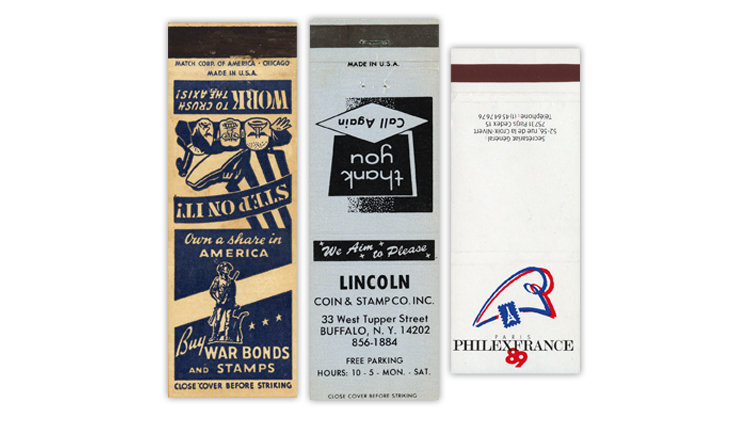 Figure 2. These matchbook covers promote the selling of war bonds and stamps, a stamp and coin shop, and a 1989 international stamp exhibition in France.
Previous
Next

Most of these matchbook covers advertise approval services from dealers who apparently viewed this approach as something novel and as a way to reach a great many noncollectors.

Little did I realize that I was just skimming the surface in those two columns. Several Linn’s readers wrote in to share information about examples they had found.

Alan Moll of Atwater, Minn., even sent copies of pages from his 16-page exhibit on the subject. He has coined a term for his study, which he uses as his exhibit title: “Phillumeny Meets Philately.”

Phillumeny is the study of match-related items, and a phillumenist is a person who collects matchbook covers or labels.

Moll says that the earliest use of matchbook covers for advertising dates to about 1894. Advertising of philatelic services began in the 1930s and lasted until about 1990.

Examples of matchbook covers not pictured in my earlier column are shown in Figures 1 and 2.

The matchbook cover with the image of Argentina’s 1964 4-peso John F. Kennedy stamp (Scott 760) offers 25 stamps from around the world that commemorate Kennedy or one of the three other U.S. presidents that were assassinated: Abraham Lincoln, James Garfield and William McKinley.

Argentina’s Kennedy stamp also is depicted on matchbook covers with different offers; one of these was shown with the Sept. 28, 2015, column.

The three matchbook covers shown here in Figure 2 promote the buying of war bonds and stamps during WWII; the Lincoln Coin and Stamp Co. of Buffalo, N.Y.; and the 1989 Philexfrance international stamp exhibition in Paris.

Moll’s exhibit includes more than 50 different philatelic matchbook covers, and I have some more common examples I can add. So I have created a list of what I know to exist. I will make this list available as an email attachment for any Linn’s reader who would like to have it. Make your request to me, John Hotchner, at jmhstamp@verizon.net.

If you don’t have access to the internet and would like a printed copy of the list, send a stamped addressed envelope to me at Box 1125, Falls Church, VA 22041-0125.