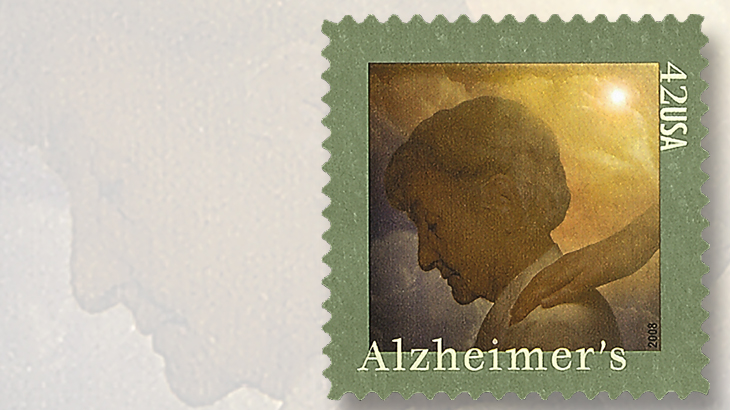 The artwork for the upcoming United States Alzheimer’s semipostal stamp has not been revealed, but the name of the artist who created it has.

Multimedia artist Matt Mahurin illustrated the 42¢ Alzheimer’s Awareness stamp issued Oct. 17, 2008 (Scott 4358), and he has also been named as the illustrator for the new stamp.

U.S. Postal Service art director Ethel Kessler is also credited on the new stamp project, and it was Kessler who helmed the USPS design project on the 2008 Alzheimer’s issue.

The Postal Service has not said if the new stamp will reuse the same design as the 2008 issue, or if Mahurin and Kessler teamed up to create a new illustration for the 2017 semipostal.

Mahurin’s work has appeared in Time, Newsweek, Rolling Stone and other publications, and he has directed music videos for performers including Joni Mitchell, Tom Waits and U2.

While the 2008 stamp has a square shape, technical details recently published by the Postal Service say the new semipostal will be vertical and boxy, the same size as the Disney Villains forever stamps issued July 15 (Scott 5213-5222).

The new semipostal will be nondenominated, but will sell initially for 60¢, paying the 49¢ first-class letter rate and collecting an 11¢ surtax for the benefit of Alzheimer’s disease research. The net proceeds will be distributed to the U.S. Department of Health and Human Services.

A planned letter rate increase in January will likely change that fee division to 50¢ for postage and 10¢ for the surtax.

The stamps will be issued in panes of 20, according to the USPS technical details. The stamps are being offset-printed and processed by Banknote Corporation of America, with an initial print quantity of 500 million stamps.