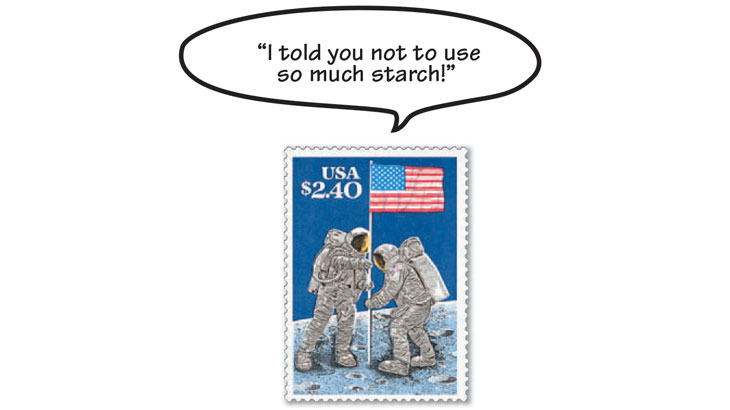 The May cartoon caption contest featured the 1989 $2.40 Priority Mail stamp that celebrates the 20th anniversary of the first manned exploration of the moon’s surface. The winner of the nonphilatelic part of the contest is Robert Pellegrino of Fort Mill,

Two themes dominated the entries in the May cartoon caption contest featuring the 1989 $2.40 Priority Mail stamp (Scott 2419). It commemorates the 20th anniversary of the Apollo 11 mission to the Earth’s moon, the first manned exploration of the moon’s surface.

Both themes are included in this entry from Bob Emrick of Forney, Texas, “Man, this is the longest par five I’ve ever played … but we finally made it to the green cheese.”

The myth about the moon being made of green cheese dates back at least 400 years, but it seems no one really believed it.

Playing golf on the moon is of more recent vintage. In fact it did not happen on the 1969 Apollo 11 visit in which astronauts Neil Armstrong and Edwin “Buzz” Aldrin walked on the moon. It was astronaut Alan B. Shepard Jr., commander of Apollo 14, the Jan. 31-Feb. 10, 1971, mission to the moon, who brought along golf balls and became the first golfer on the moon.

Another theme used by several Linn’s readers was the difficulty of planting the flag on the moon’s surface. This group is represented by Jeffrey Piwowar of Valley City, Ohio, whose line is “Buzz, what do you mean you forgot the posthole digger!”

The nonphilatelic line winner for this contest is another takeoff on the flag planting, but this time about the flag itself, as shown in the illustration nearby. It was sent by Robert Pellegrino of Fort Mill, S.C.

The philatelic side of the contest was won by James Maguire, whose line is “This new Post Office is really far out, man!”

“What a time for my nose to start itching!” from Charles Wales of Ashburn, Va.

“Does this uniform make me look fat?” by Steve Kotler of San Francisco, Calif.

“President Trump asked us to scout out a good location for his new golf course …” sent by Edgar Dunlap.

”Buzz, did you check with the power company to get a permit to install this here?” from “Spike” Savage of Presque Isle, Maine.

“Is this for the first or the 18th hole?” by Mike Dornbrock of Cedar Falls, Iowa.

“After we get through here, we’ll plant the radishes, cucumbers and lima beans over there” by Gilbert Schaye of New York, N.Y.

“So, if there are just two of us, who is taking the picture?” sent anonymously.

The next cartoon caption contest will be announced in the July 9 issue of Linn’s.