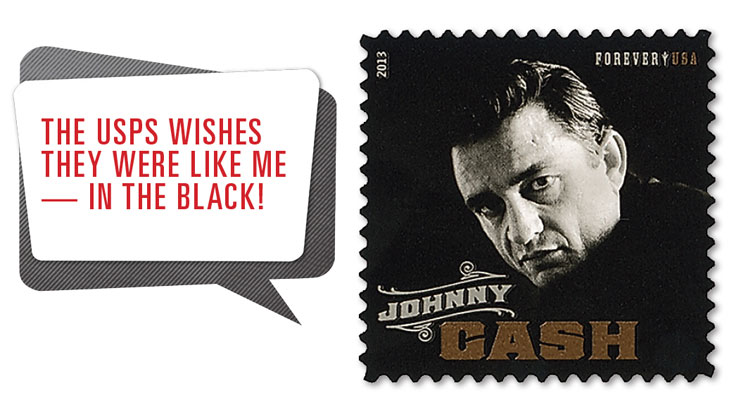 The winner of the philatelic part of the May cartoon caption featuring the 2013 Johnny Cash forever stamp in the Music Icon series is Mildred Barylski of Warrenton, Va., who plays off Johnny Cash’s signature choice of black clothing to tweak the United St

Johnny Cash, the country music star known as the “Man in Black,” was celebrated on a forever commemorative stamp issued June 5, 2013, in the Music Icons series (Scott 4789).

Stories vary as to why he dressed in black for most of his onstage performances.

Originally it was said that it was the only color he and his backup band had in common when they decided to wear matching outfits. But it was later adopted by Cash as a form of protest as he explained in his 1971 song Man in Black.

He says in one verse of that song: “I wear the black for the poor and beaten down

Livin’ in the hopeless, hungry side of town.

But is there because he’s a victim of the times.”

The May cartoon contest featured the Johnny Cash stamp. Many entries made the connection between Cash’s costume and philately with some version of “Well, you might have guessed my favorite stamp is the Penny Black.” This one was sent by Nicholas D’Amico of Kingman, Ariz.

Another popular theme involved playing off the lyrics of his 1956 song I Walk the Line. John Walbridge of Bloomington, Ind., represents this subject with “When I go after coil pairs, I want the line.”

Curiously, nine out of 10 entries in the Johnny Cash cartoon contest were in the philatelic category so choosing a winner was difficult. But Mildred Barylski of Warrenton, Va., takes the prize for the best philatelic caption.

In the winning nonphilatelic caption, Mary Lou Moseley of Owensboro, Ky., observes: “Elvis was called the King of Rock and Roll

Me, the ‘Man in Black’ and ‘The Undertaker.’

But even without the gyrations and sequins,

I lasted much longer than he did!”

Both winners will receive a 13-week subscription to Linn’s (a new subscription or an extension). Here are the best of the other runners-up. Many of these entries were based on songs written or recorded by Cash.

For example, the entry by Steven Schweon of Saylorsburg, Pa., is along the same theme as the Folsom Prison Blues: “I’ve got the ‘postal system blues,’ The mail keeps … dragging on.”

“Oh, no, I lost all my stamps in a burning ring of fire!” came from Nancy Weaver of Obetz, Ohio.

“How high’s the stamp price, mama? She said it’s 55 cents and rising” was sent by Jesse Hykes of Raymore, Mo.

Steve Kotler of San Francisco, Calif., wrote, “It looks like the USPS has been taken over by ‘A boy named Lou!’ ”

“To buy this stamp, I rather walk the line than wait in line,” was submitted by Tom D’Aquila of Berlin, Conn.

Thanks and a tip of the hat to all who entered. The next contest will be announced in the July 12 issue of Linn’s.

June cartoon caption contest looks back to the age of reptiles