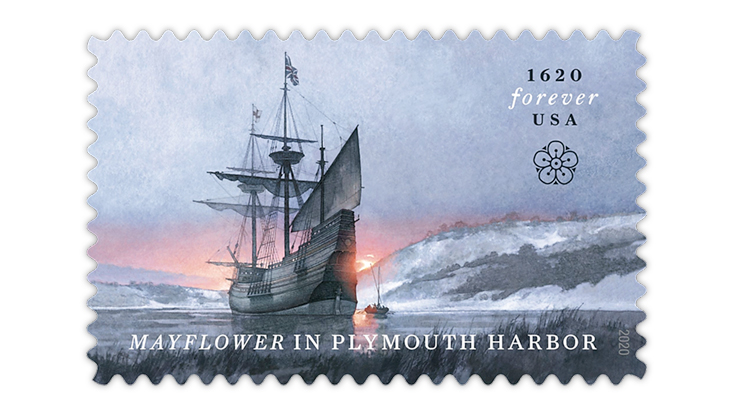 In 1620 the Pilgrims aboard the English merchant ship Mayflower arrived in Plymouth Harbor. Four centuries later, the readers of Linn’s Stamp News selected the single commemorative forever stamp celebrating this historic event as their overall favorite among United States stamps issued during 2020. The stamp received 249 votes in this category.

The 2020 Linn’s U.S. Stamp Popularity Poll was introduced in the Dec. 21, 2020, issue. A two-page magazine spread illustrated all of the stamps issued during the calendar year.

Readers voted online and by mail, with ballots published each week in Linn’s through the March 1 issue.

Hundreds of online voters also participated via Linns.com, bringing the total of mail-in and online votes to 1,236. The votes from online and mail-in ballots were combined to calculate this year’s winners.

The Mayflower in Plymouth Harbor stamp was issued Sept. 17, 2020, in a pane of 20 and features original artwork by Greg Harlin that shows the ship in the harbor at sunset.

“The painting was digitally refined to convey a scene of desolate beauty at the end of the Pilgrims’ long journey to an unfamiliar world,” according to the Postal Service.

Ashton Potter printed the stamp’s design and inscriptions using offset lithography. A stylized hawthorn flower, seen at upper right on the stamp, is intaglio-printed. The hawthorn is sometimes called a mayflower because it blooms in May.

As stamp collectors, Linn’s readers have a strong affinity for stamps that honor the nation’s history. So it comes as no surprise that the Mayflower in Plymouth Harbor stamp took the top spot as overall favorite in the 2020 U.S. stamp poll.

Linn’s U.S. Stamp Popularity Poll, which began in 1948, is intended as an entertaining and fun way for readers to voice their opinions about the U.S. stamp program. When the poll was first conducted, the categories consisted only of best stamp and worst stamp.

To read the rest of this article and review the tables detailing how readers voted in the various categories, subscribe to Linn’s Stamp News.