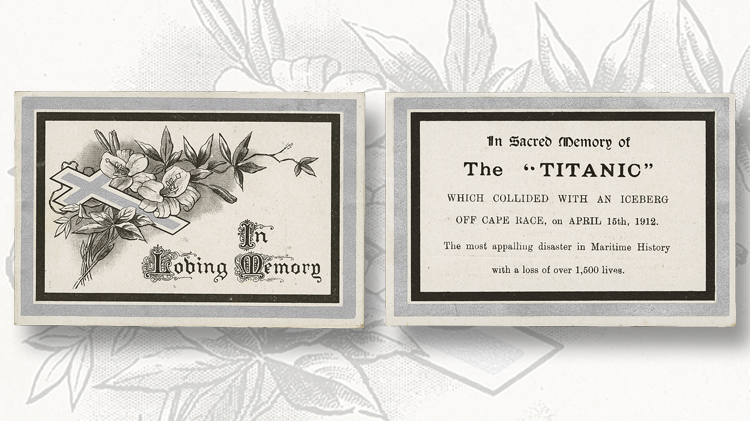 The first and third pages of a folded memorial card for the more than 1,500 people who died in the sinking of the RMS Titanic on April 15, 1912. Such cards were often sent as keepsakes to friends and relatives of people who had died. 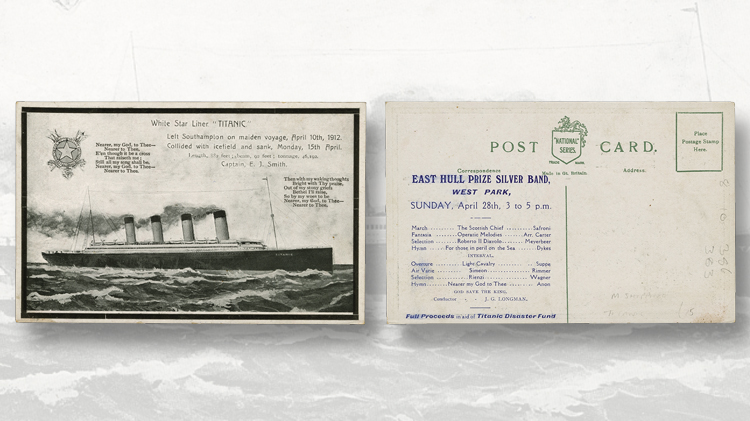 This postcard advertises a memorial concert given April 28, 1912, two weeks after the Titanic disaster for the benefit of the Titanic Disaster Fund.
Previous
Next

Ordinarily I would not include in this column covers that were not mailed, but this is a special case.

The sinking of the RMS Titanic is one of those events that stands out in history, and items that relate to it are scarce. I attribute this to the several museums that specialize in the subject that have vacuumed up much of what exists.

Courtesy of dealer friend Bob Toal, I recently got two Titanic items that were supposed to be mailed, but never made it to the postbox. For me, that does not disqualify them from a place in my collection of mourning covers and other material that relates to death and dying.

The first is an unmailed mourning cover with black bands around the outside. I won’t show it because it is a garden-variety envelope distinguished only by the content: a memorial card of the type very much in vogue at the time of the April 15, 1912, disaster.

It is a folded card, and the first and third pages of it are shown nearby. The second page is a picture of the ship, and the fourth includes the following poem:

“She struck where the white and fleecy waves,

But the cruel rocks, they gored her side,

Her rattling shrouds, all sheathed in ice,

With the masts went by the board,

Like a vessel of glass, she stove and sank,

No author is credited, but it is noted that the card was “printed and published” by the East London Printing Co.

The second item is an unmailed postcard.

The back of the postcard advertises a concert to be given on April 28, 1912, by the East Hull Prize Silver Band, with “full proceeds in aid of Titanic Disaster Fund.”

While Google failed me regarding the discovery of additional information about this concert, I did find a similar event given May 14, 1912, by “the H.M.C.S. Niobe concert party,” for the same fund.

A report in the Halifax, Nova Scotia, newspaper read: “The entertainment given by the H.M.C.S. Niobe concert party in St. George’s Hall last evening, in aid of the Titanic disaster fund, was a most successful affair. Those fortunate enough to be present were treated to a very pleasing and varied program, every member being well rendered, and enthusiastically received. The cutlass swinging and exhibition of strength by Mr. Daniels, and the selection by the Niobe quartette are deserving of special mention. The orchestra under the direction of Bandmaster Hopkins rendered some choice selections … ”

There likely were many other such memorial events.

The fund, one of at least two that were established, distributed money to relatives of those who died in the disaster, left without the income that a deceased passenger would have provided.

For those interested in mourning-related philately, there is national group, the Mourning Stamps and Covers Club, that studies such material, and publishes an excellent 28-page quarterly newsletter. Dues are a mere $15.