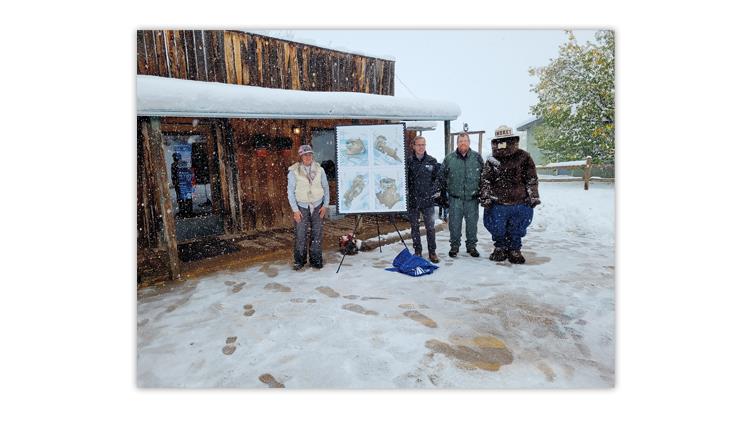 The small town of Otter, Mont., played host to the Oct. 12 first-day-of-issue postmark for the new Otters in Snow forever stamps. A locally organized ceremony took place in front of the post office where a foot of snow had fallen and continued to fall thr 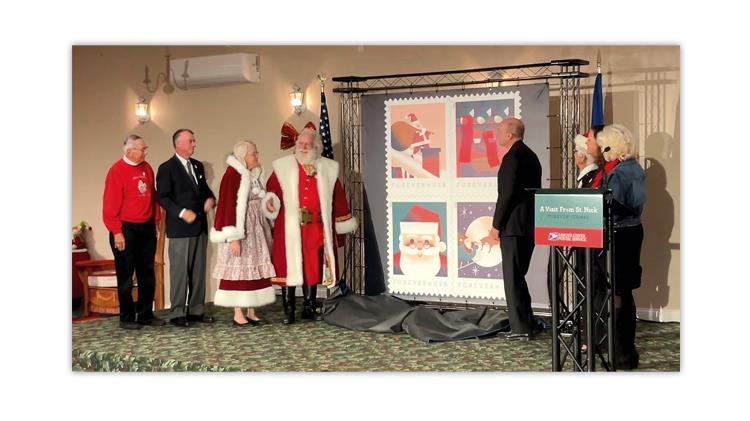 The Oct. 7 unveiling of the four United States A Visit from St. Nick forever stamps in Santa Claus, Ind. Photo by Jay Bigalke.
Previous
Next

Stamps capture a snapshot of history, culture, geography and more for any country. This past week I was thrilled to witness some great moments in America through stamps at two first-day-of-issue events.

The first was for the A Visit from St. Nick stamps on Oct. 7 in Santa Claus, Ind., and the second for the Otters in Snow stamps Oct. 12 in Otter, Mont. What is hilarious is that both events, individually, delivered on their names.

I will start with the Montana event. While this wasn’t a United States Postal Service headquarters ceremony, with a little encouragement, I worked with local Postal Service representatives to organize a small ceremony and a cool photo opportunity in Otter on the issue date of the stamps. Otter is located in southeastern Montana, a part of the country I have always wanted to visit.

So I took some vacation days and headed out west. I knew before I left that the weather forecast was predicting snow, and I planned accordingly. What I did not anticipate was the volume of snow that was delivered on that Tuesday. About a foot of snow had already fallen at the post office when the ceremony started at noon. So I was already in the town of Otter, population approximately 15, and it was snowing. That completed the stamp subject title. I thought it doesn’t get better than that, but it did.

The hospitality of the postmaster was amazing. She went above and beyond to deliver; the event included coffee, cookies, decorations, an organized coloring contest for local school-age children, and more.

Also, the U.S. Forest Service ranger serving that area brought Smokey Bear with him and provided remarks on the history of the town’s name.

The photo shown nearby is my priceless souvenir of the event. The people were great, and I was able to share our wonderful hobby of stamp collecting with them.

And the Postal Service proved very quickly that snow isn’t a deterrent for an event in Montana.

But I will note that even in good weather, the four-hour drive back to the airport was one of the very few white-knuckle experiences I have had driving.

On that drive, I had time to reflect that just a few days earlier on Thursday, I had traveled by car a few hours from home to attend the event in Santa Claus. Naturally, St. Nick himself was at the event, thus completing the stamp subject name because St. Nick visited. And he made a magical first appearance, arriving in a motorized sleigh right before the official unveiling, waltzing up to the stage and helping to pull the drape to reveal the stamps.

But there was another moment during that ceremony that moved me even more. It was the 20-minute speech by Patricia Koch, president of the Santa Claus Museum and Village, who provided an interesting history lesson on the town’s names and events. She has spent years helping Santa answer children’s letters.

Fortunately, I recorded her speech. You can see it online at Linn’s Stamp News’ YouTube page.

She received a standing ovation at the end of her comments.

After that event, as is standard at most first-day ceremonies, the participants, including Santa and Mrs. Claus, signed autographs. I told Santa that I was traveling to Otter in a few days for another stamp event, and he said he knew where that was. I guess I shouldn’t have been surprised.

Later, when I was at the Santa Claus post office, I saw them both again in the parking lot. We started talking, and it turns out Mrs. Claus has a family connection to the southeastern Montana area.

I guess it really is a small world, but one filled with great people and stamps and the post office connecting us all.

St. Nick and sleigh on next USPS holiday postage label