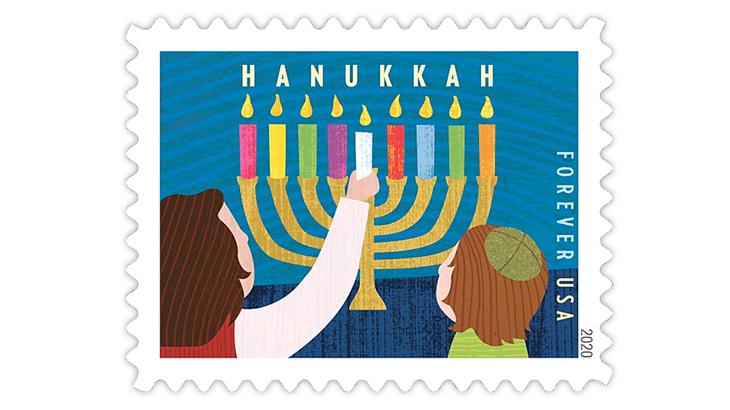 A new United States Hanukkah forever stamp will be issued Oct. 6. The stamp is the 14th U.S. issue for the holiday. 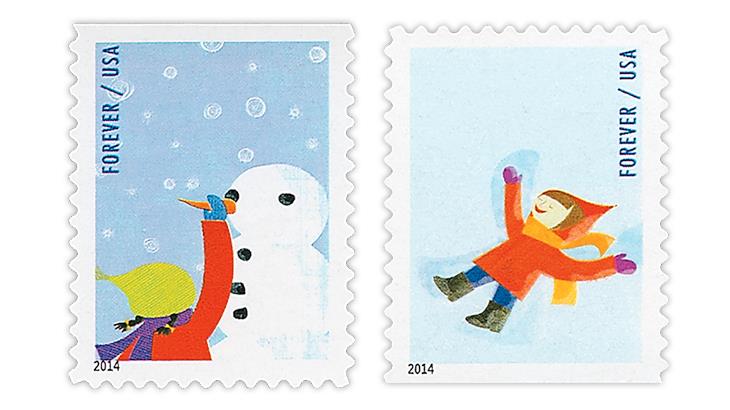 Hanukkah stamp artist Jing Jing Tsong previously illustrated two stamps from the 2014 Winter Fun set of four. Much of her work is found in book illustrations. 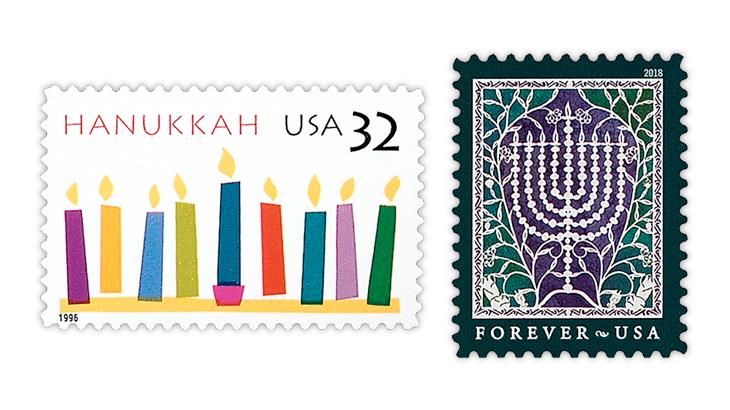 The menorah is a popular element on U.S. Hanukkah stamps. The first issue in 1996 (left) and the most recent issue from 2018 (right) both feature the menorah. These two stamps are also joint issues with Israel. 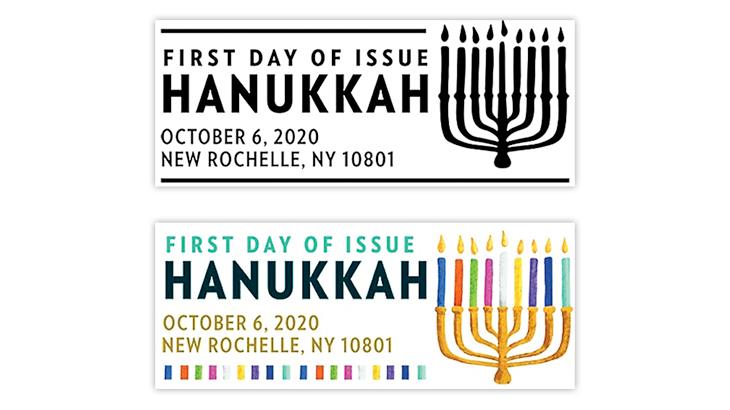 Two pictorial postmarks have been created as first-day cancels for the new Hanukkah stamp. The shared design also depicts a menorah.
Previous
Next

The United States Postal Service will issue its 14th Hanukkah stamp on Oct. 6. The design of the new nondenominated (55¢) forever stamp includes an illustration by Jing Jing Tsong depicting two children celebrating the festival and a menorah with candles of various colors.

USPS art director Ethel Kessler designed the new stamp, which is being issued in a pane of 20. The stamps are offset-printed by USPS contractor Ashton Potter.

Also known as the Festival of Lights, Hanukkah is observed for eight nights and days. It commences this year at sunset on Dec. 10.

Traditions associated with the Jewish holiday include lighting the hanukiah (a menorah with nine candles), prayer, singing songs, giving gifts to children, and playing games with the dreidel (a four-sided spinning toy).

The celebration commemorates the 164 B.C. victory of the Jewish Maccabees over Syrian occupiers in the land of Israel and the subsequent rededication of the Jerusalem temple.

According to the Postal Service: “The stamp art’s colorful digital illustration shows the lighting of the Hanukkah menorah — the nine-branched hanukiah — on the last evening of the holiday. All eight of the Hanukkah candles have been lit, and the child is reaching up to replace the shamash, the helper candle used to light the others in the menorah.”

The stamp illustration was created by Jing Jing Tsong. Publisher Simon & Schuster wrote: “Jing Jing Tsong is a mom, musician, and surfer whose grown-up job is drawing pictures. Her technique, which layers color and texture, is influenced by her experiences working in traditional stone lithography and monoprints.”

Much of her work has been in book illustration, but she also previously contributed two illustrations for the U.S. Winter Fun forever stamps issued Oct. 23, 2014 (Scott 4937-4944).

Tsong’s illustrations for that set show a child adding a carrot nose to a snowman (Scott 4938 and 4942) and a child making a snow angel (4940 and 4944). These stamps were issued both in double-sided panes of 20 and in a pane of 18 designed to be dispensed from automatic teller machines. The stamps on the ATM pane are slightly smaller than those from the double-sided pane.

The artwork for those two stamps and the new Hanukkah stamp is pictured on the artist’s website.

The caption for these illustrations reads: “As a child, I was an avid stamp collector. So it is a thrill to see my images on United States Postal Service Forever Stamps.”

In a 2018 post on her website, Tsong shows a photograph of herself as a youngster with her collection in a large stock book, open in front of her.

“I loved my stamp collection and in fact, still have it,” she wrote.

As this issue of Linn’s was being prepared for publication, the Postal Service had not announced plans for an online event welcoming the Hanukkah forever stamp. In-person first-day ceremonies were suspended in March as a response to the ongoing COVID-19 pandemic.

As an important symbol of the Jewish festival, the menorah has featured prominently on nine of the 14 stamps created by the Postal Service for Hanukkah.

This includes four stamps sharing the design of the 1996 32¢ Hanukkah stamp, which was reused for later stamps with denominations of 33¢, 34¢ and 37¢; and the 2018 Hanukkah forever stamp.

The 1996 and 2018 U.S. stamps were joint issues with Israel, with both nations using nearly identical stamp designs.

The menorah is also featured on two first-day cancels created for the new U.S. stamp, one in black and the other in color. The black postmark is applied to most customer-submitted first-day covers, and both postmarks are featured on different FDCs created and sold by the Postal Service.