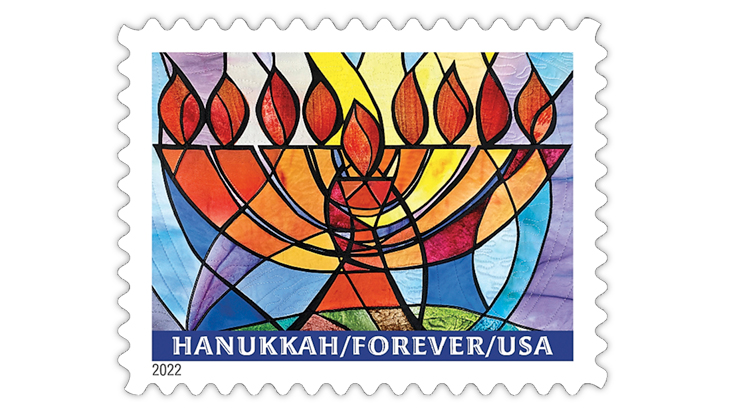 The Oct. 20 United States Hanukkah forever stamp is the 15th U.S. issue for the holiday.

The United States Postal Service continues its celebration of Hanukkah with the Oct. 20 issue of its 15th stamp commemorating the holiday.

The new nondenominated (60¢) forever stamp shows a menorah in a design taken from an original wall hanging by artist Jeannette Kuvin Oren.

The Postal Service scheduled a first-day ceremony for the nondenominated (60¢) Hanukkah forever stamp on Thursday, Oct. 20, at 11 a.m. at the Temple Emanu El, 4545 Brainard Road, in Orange Village, Ohio.

Although the ceremony location is in Orange Village, Ohio, the first-day postmark reads “Chagrin Falls.” The servicing post office is in Chagrin Falls.

In the Hebrew calendar, Hanukkah, also known as the Festival of Lights, begins on the 25th day in the month of Kislev, a date that falls in late November to late December in the Gregorian calendar, and is observed for eight nights and days.

This year, Hanukkah begins at sundown on Dec. 18.

Traditions associated with the Jewish holiday include lighting the hanukkiah (a menorah with nine candles), praying, singing songs, giving gifts to children and playing games with the dreidel (a four-sided spinning toy).

The celebration commemorates the 164 B.C. victory of the Jewish Maccabees over Syrian occupiers in the land of Israel and the subsequent rededication of the Jerusalem temple.

The design used on the stamp is based on a wall hanging by artist Jeannette Kuvin Oren. According to her website, Oren specializes in large installments of artistic works using glass, mosaic, metal, fiber art, calligraphy, papercutting and painting.

For 37 years, Oren has created commissioned art for houses of worship, schools, community centers and camps around the world.

“It’s been a dream to have my art on a stamp,” Oren told Linn’s Stamp News. She said that she first reached out to the U.S. Postal Service about designing a stamp 30 years ago.

Oren’s dream finally became reality when Ethel Kessler, an art director for the U.S. Postal Service, contacted her about a wall hanging featured on her website and asked if she could adopt it for a stamp.

Most of Oren’s art far exceeds the dimensions allowed on a postage stamp. Oren said that one of her wall hangings measures 6 feet by 24 feet.

The wall hanging that Kessler wanted to adopt is titled Light Unto the Nations and measures 52 inches by 72 inches. “It was different to work on such a small scale,” Oren said.

Oren also explained to Linn’s that the image had to be altered from the seven-branch menorah in the ...