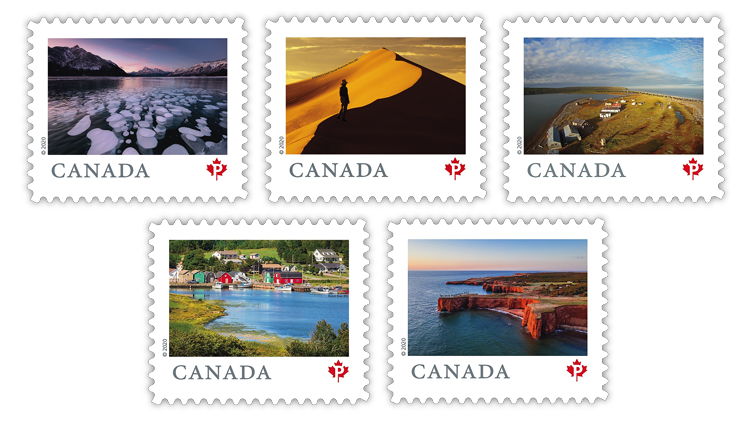 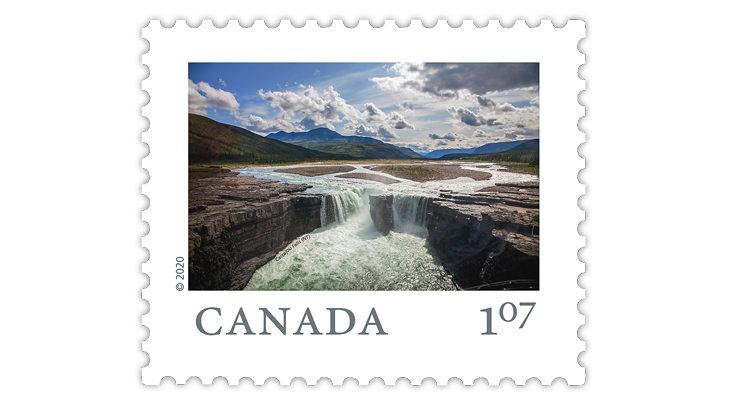 The $1.07 stamp in Canada’s new From Far and Wide set shows Carcajou Falls in the Northwest Territories. Canada Post charges more for domestic-rate stamps when they are purchased individually, instead of in multiples, such as a booklet of 10. The new rate 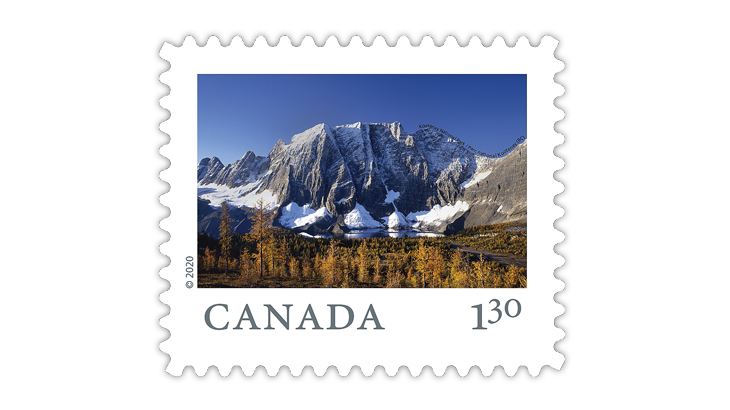 Canada’s Kootenay National Park is celebrating its 100th anniversary this year. The $1.30 stamp for mail to the United States depicts a view of mountains in this park in British Columbia. 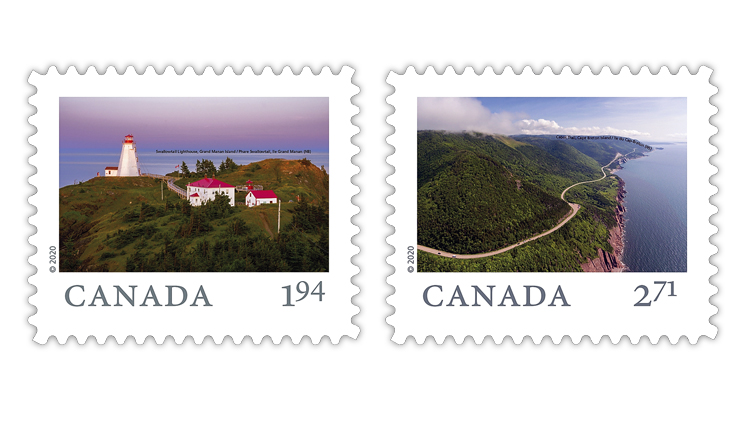 In its bulletin for collectors, Details, Canada Post said: “Join us as we visit the newest must-see places in the third issue of our From Far and Wide series. From the Rocky Mountains in British Columbia to the rugged coast of Nova Scotia, the scenic vistas in this set of nine stamps are sure to inspire you to pack a bag, grab a map and go.”

Five of the nine designs in the new From Far and Wide set are for permanent stamps, nondenominated domestic-first class rate stamps with a “P” side a red maple leaf. The new permanent rate is 92¢, up 2¢ from 90¢.

One stamp in the set is denominated $1.07, the new price for a single-purchase domestic-rate stamp.

The other three stamps are denominated $1.30, the new rate for mail to the United States; $1.94, the rate for oversized mail; and $2.71, the international rate.

The five permanent stamps are se-tenant (side-by-side) in booklets of 10, coils of 100 and in a souvenir sheet that includes all nine designs of the new set.

The first permanent stamp depicts Canada’s largest man-made lake, Abraham Lake in Alberta. The lake was created in 1972 during the construction of the Bighorn Dam on the North Saskatchewan River system in the Canadian Rockies.

Methane gas bubbles trapped in ice are featured in the foreground of the photograph shown on the stamp. An article by Lyndsie Bourgon on the National Geographic website listed walking on these frozen bubbles as one of the six unique winter experiences in Alberta.

The next permanent stamp in the new set shows Athabasca Sand Dunes Provincial Park in Saskatchewan.

In writing about these dunes on the Smithsonian Magazine website, Jennifer Billock said that they “span about 62 miles across their own provincial park in Saskatchewan, with individual sand dunes rising up almost 100 feet in height and stretching out for nearly a mile. They are the northernmost active sand dunes in the world and are only accessible by floatplane or boat.”

The third permanent stamp pictures Herschel Island-Qikiqtaruk Territorial Park. Established in 1987, it is the first territorial park in the Yukon Territory.

Herschel Island is located about 3 miles off the coast of the territory in the Beaufort Sea.

According to Canada Park, the park is “not only a prime destination for experienced wilderness seekers,” but it is also a living park “home to the Inuvialuit people, who still use the area for hunting and fishing.”

Another fishing village, this one on Prince Edward Island, is featured on the fourth permanent stamp. The village, French River, is part of the Green Gables shore touring region of places associated with the series of novels by Lucy Maud Montgomery that began with Anne of Green Gables in 1908, according to the tourism website of the Prince Edward Island’s Department of Economic Growth, Tourism and Culture.

The website said, “One of the most painted panoramas on Prince Edward Island, the tiny fishing village of French River exudes the rural charm and timeless beauty so desired by many of our Island’s guests.”

The fifth permanent stamp shows the red sandstone cliffs of Quebec’s Iles de la Madeleine. Also called Magdalen Islands, this archipelago in the Gulf of St. Lawrence is not only known for its scenery and beaches, but also for its seafood cuisine and thriving arts scene, according to Canada Post.

The $1.07 stamp, which was produced in coils of 50, shows Carcajou Falls in the Northwest Territories.

Canada Post said: “After meandering through a flat river valley, the Carcajou River makes a sudden 670-metre [about 2,200 feet] drop, creating the spectacular upper Carcajou Falls — the first of three drops. To witness the dramatic falls, you can either hike along the demanding Canol Heritage Trail or take a flightseeing tour from the nearby town of Norman Wells.”

The other three denominated stamps are available in separate booklets of six and coils of 50.

The $1.30 stamp features Kootenay National Park, which is celebrating its 100th anniversary this year. The approximately 540 square mile park is located in the Canadian Rockies in British Columbia.

The Parks Canada website said, “Established in 1920 as part of an agreement to build a new road across the Rockies, Kootenay National Park is a place of unique contrasts, from icy mountain rivers to steamy hot springs.”

New Brunswick’s most photographed lighthouse, Swallowtail Lighthouse on Grand Manan Island in the Bay of Fundy, is pictured on the $1.94 stamp.

The lighthouse, which has been in operation since 1860, is an “ideal vantage point for seal, whale and seabird watching,” according to Canada Post.

The $2.71 stamp shows a section of Cabot Trail, a highway and scenic roadway on Nova Scotia’s Cape Breton Island in the Atlantic Ocean.

The island is listed eighth on Travel + Leisure magazine’s top 15 islands of the world and first on its lists of best islands of Canada, and Cabot Trail was included among the craziest roads in the world in a 2019 article by Jill Krasny on the magazine’s website.

“Located on Cape Breton, one of the world’s most beautiful islands, the Cabot Trail is a spectacular 186-mile long highway that offers incredible climbs and views of canyons, highlands and coastlines,” she wrote. “Water lovers can go sailing, fishing or kayaking, while artsy types can check out the galleries in the Highlands.”

Stephane Huot has designed all three sets in the series, using photographs from different sources. The photographers are listed in the selvage below the nine stamps in the souvenir sheet.

Lowe-Martin printed the stamps and souvenir sheet by lithography. The $1.07 coil stamp is 26 millimeters by 22mm, and the other stamps are 24mm by 20mm. The souvenir sheet is 150mm by 75mm.

Canada Post reports that 70,000 souvenir sheets were printed. No quantities were reported for the stamps printed in booklets and coils because they are definitives and can go back to press as needed.

The new From Far and Wide stamps and related products are available from Canada Post’s online shop. Stamps and FDCs also are available by mail order from Canada Post Customer Service, Box 90022, 2701 Riverside Drive, Ottawa, ON K1V 1J8 Canada; or by telephone from the United States or Canada at 800-565-4362, and from other countries at 902-863-6550.

In addition, Canada’s stamps and stamp products are available from many new-issue stamp dealers, and from Canada Post’s agent in the United States: Interpost, Box 400, Hewlett, NY 11557.