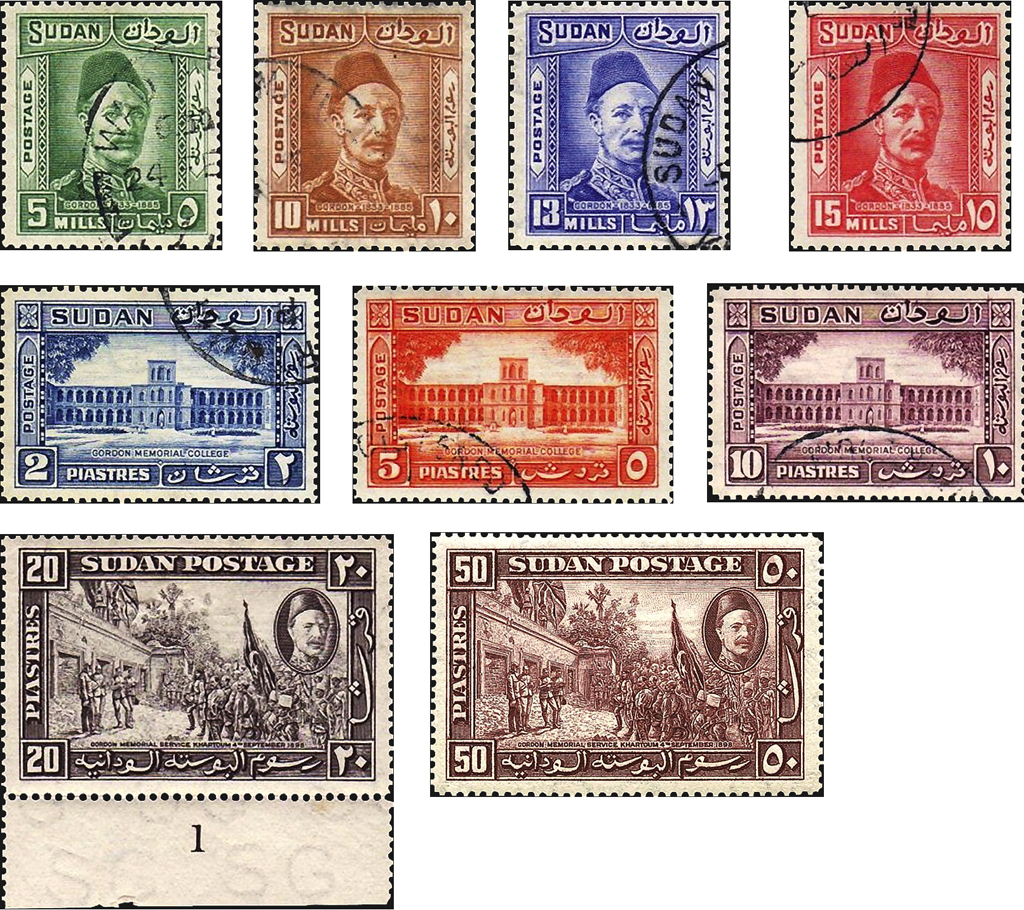 Thomas De La Rue & Company of Great Britain printed the stamps on paper watermarked multiple “S G.” The watermark is identified in the Scott catalog as number 214. The stamps were issued in panes of 50 and are perforated gauge 13½ by gauge 14.

The stamps range in denomination from 5 milliemes to 50 piasters. This was the first time that a high 50p denomination was produced for the Sudanese postal system.

Three different designs were used to create this attractive set.

The central design on the lowest four denominations shows a portrait of Gordon based on a photograph of a 1911 painting by Miss C. Ouless. At the bottom of the portrait is the inscription “Gordon 1833-1885.”

The top frame of these four stamps contains “Sudan” in Arabic and in English. On the frame on the left side is the word “Postage” reading up. On the right is the Arabic equivalent to “Postage fees” reading down.

The bottom portion of the frame contains the denomination and currency in English at left and in Arabic at right.

The central design on the 2p, 5p and 10p stamps shows Gordon Memorial College in Khartoum.

Khartoum is the capital of Sudan and was the place of Gordon’s death. Below the college is the text “Gordon Memorial College.” The frame on these three stamps contains the same text as on the four lower-denomination stamps.

The central design of the two stamps with the highest denominations was adopted from a painting by R. Caton Woodville depicting the memorial service that took place 13 years after Gordon’s death.

At upper right is an oval showing the face of the general. At the bottom of the central design is “Gordon Memorial Service Khartoum 4th September 1898.”

The four corners contain the denomination in Arabic at right and in English at left. The left frame side contains the currency in English, reading up, with the same in Arabic at left, but reading down.

No varieties of this issue are known.

Color trials of the 5m and 5p are known. Proofs in the same issued colors as the regular stamps exist for the 5m, 5p, 20p and 50p stamps. The color trials along with the proofs are known imperforate, without gum, and on watermarked paper.

Charles George Gordon was a major general in the British Army. He was known as “the Chinese Gordon” for defeating a much larger force in the Taiping Rebellion in China. He had a reputation as a courageous and audacious leader who could take on difficult situations and be successful.

Gordon was an important figure in the history of Sudan. He was appointed governor-general of the Sudan in the 1870s, but he later resigned.

After returning to Great Britain in 1880, he was again called upon by the British government to report to Sudan, where a grave revolt had broken out. The uprising was led by the Muslim reformer, Muhammad Ahmad, who proclaimed himself Mahdi (the guided one).

Gordon’s mission was to go to Khartoum and evacuate loyal soldiers and civilians, many of whom were Egyptian nationals, and bring them back to safety in Egypt. But after Gordon evacuated around 2,500 people, he decided to build up a small group of soldiers to stay and fight the Mahdi’s forces.

Gordon and Muhammad Ahmad spent much time trying to convert each other to their respective religions but without success.

The Mahdi’s forces besieged the city of Khartoum, and Gordon set up a citywide defense to repel them. The siege lasted nearly a year.

The British public began to pressure the government to send aid to Gordon and his troops. The government was slow to respond. The British relief force finally arrived at Khartoum two days after the city fell, and Gordon was killed. Gordon died Jan. 26, 1885, just two days before he turned 52.

Add this set of Sudan history to your collection. You will not be disappointed.