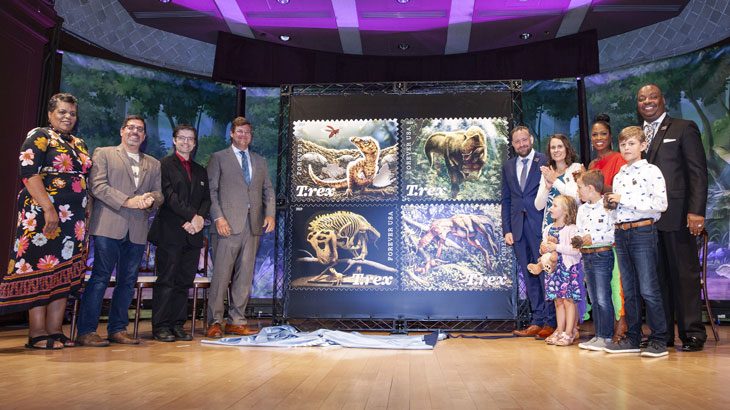 Tyrannosaurus Rex Forever stamps were unveiled and dedicated Aug. 29 at the Smithsonian National Museum of Natural History in Washington, D.C. 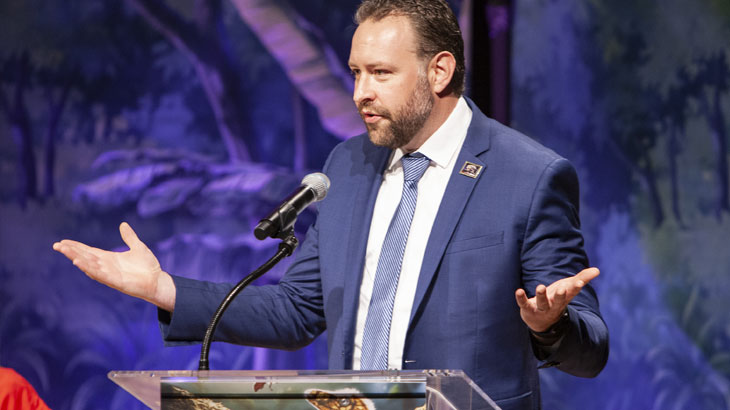 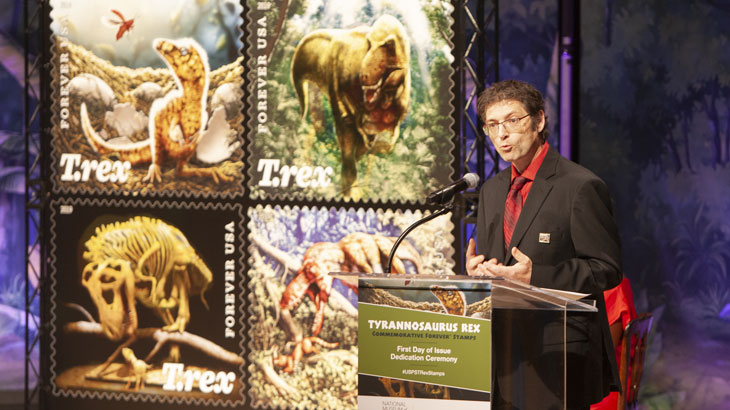 Scientist and artist Julius T. Csotonyi shared how he came to design the stamps.
Previous
Next

Among the speakers at the ceremony was Dr. Kirk Johnson, director of the museum and paleontologist who has led expeditions in 18 states and 11 countries.

During his remarks, Dr. Johnson shared something he called “terribly embarrassing” — among the museum’s dinosaur fossils, it did not have a Tyrannosaurus rex.

But that was remedied on June 8, 2019, when The David H. Koch Hall of Fossils—Deep Time opened with a real T. rex skeleton featured as the centerpiece. Collected in 1988 in Montana, the skeleton is known as the “nation’s T. rex” and was brought to the Smithsonian under the cooperation of U.S. Army Corps of Engineers, the Museum of the Rockies, and a rancher named Kathy Wankel.

The nation’s T. rex is the young adult featured on two of the new stamps.

“We’re delighted that it’s going to be flying around the nation on endless letters and postcards for the next several years,” Dr. Johnson said.

Isaac Cronkhite, the Postal Service’s chief human resources officer and executive vice president, took the podium next to share some impressive facts about the T. rex.

“More than any other dinosaur, since its discovery more than a century ago, the T. rex has stirred the public imagination,” he said.

Cronkhite called the ceremony participants along with his three children to the stage to reveal and dedicate the stamps.

“They’re truly miniature works of art,” he said. “They are dazzling.”

Dr. Matthew Carrano, curator of the “Dinosauria” exhibit at Smithsonian National Museum of Natural History, was also featured at the dedication. Dr. Currano collects fossils museum, and says seeing the T. rex on a postage stamp is like seeing one of your children make it in the world.

“I kind of think of [dinosaurs] as my children,” he said, smiling.

Dr. Carrano said the T. rex is “the most American of dinosaurs” — the species lived almost exclusively in the United States.

“It’s incredibly appropriate to have it on a U.S. stamp,” he added.

Finally, Julius T. Csotonyi, scientist and paleoartist, shared how he came to design the stamps.

“Now, these stamps, of course, 66 million years in the making — fortunately it didn’t take me that long to paint them, because I have a little bit more of a tighter deadline than that,” he joked.

Csotonyi and his team came up with a set of designs to show how the T. rex would have looked in four different points in its life cycle, from hatchling to adulthood.