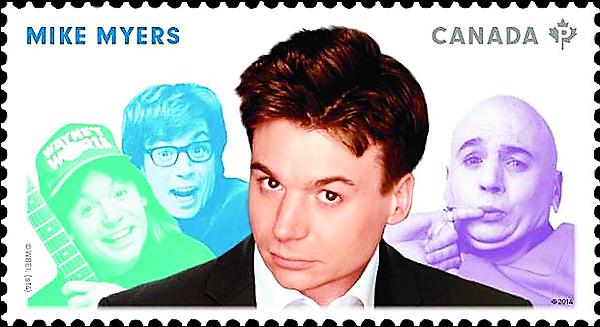 Canada will issue this Mike Myers permanent-rate stamp in August or September. The stamp is part of a set honoring Canadian Comedians.

Actor and comedian Mike Myers will soon receive Canadian honors when his new stamp debuts in late August or early September. The stamp is part of a set for Canadian comedians; the other honorees have not yet been named by Canada Post.

Myers, born in Toronto, Ontario, May 25, 1963, to British parents, is known for his role in the NBC television series Saturday Night Live, the Wayne’s World film series, three Austin Powers movies, and more, including the voice of Shrek in the animated film series of the same name.

The nondenominated (85¢) Mike Myers permanent-rate stamp was unveiled June 1 on the CBS Sunday Morning show during an interview about the documentary Supermensch: The Legend of Shep Gordon, which Myers directed.

The commemorative stamp features a photograph of Myers and images of three characters he’s played in films. From left to right are Wayne Campbell from Wayne’s World, and Austin Powers and Dr. Evil from the Austin Powers series.

In the aforementioned Sunday Morning interview, Myers said he received his comic inspiration from his dad, Eric, a native of Liverpool, England.

“If my dad had written a book of philosophy, it would be called, ‘In Praise of Silly,’” Myers said. “He thought that silly was our natural state, and we only get serious to get to silly.”