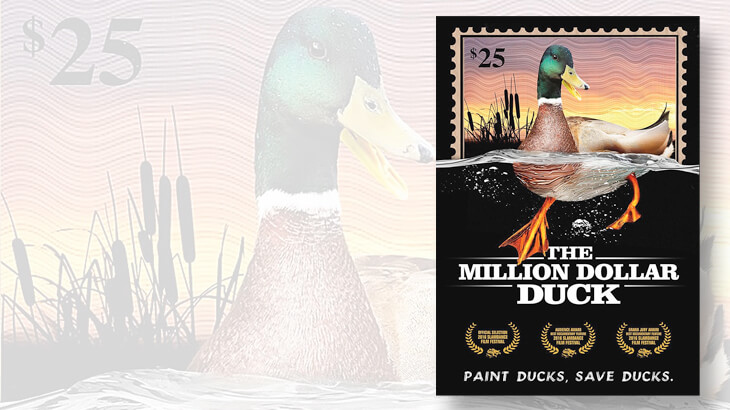 The Animal Planet cable television network will show The Million Dollar Duck, a documentary film about the competition and judging of the federal duck stamp art contest, on Sept. 14. 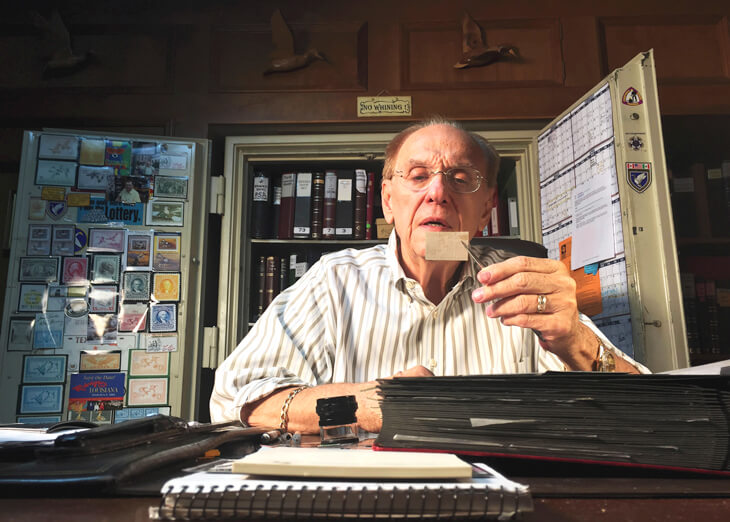 Bob Dumaine, owner of Sam Houston Philatelics and Sam Houston Duck Co., examines a duck stamp in this still from the documentary The Million Dollar Duck.
Previous
Next

The Million Dollar Duck is scheduled at 9 p.m. Eastern Time/Pacific Time, according to the network, as part of its Animal Planet Presents series. Check local listings to confirm show times.

“The Million Dollar Duck is a humorous and quirky film that reveals the excitement and tension around the art competition that has brought in over 800 million dollars to protect America’s wetlands … with a duck stamp,” said Patrice Andrews, general manager of Animal Planet.

“This Animal Planet Presents film perfectly supports our goal to galvanize our audiences around animal welfare and the environment while showing how we can positively impact the natural world.”

Discovery Communications reports that The Million Dollar Duck “dives into the wonderfully eccentric world of the Federal Duck Stamp Contest — the only juried art competition run by the U.S. government — which follows six artists as they compete in the most intense competition of their life.”

Months before the federal duck stamp is issued each year, American artists are invited to participate in an open competition to create the artwork that will appear on the stamp.

The new film documents the competition at the 2013 federal duck stamp contest.

The contest is sponsored by the United States Fish and Wildlife Service, part of the U.S. Department of the Interior, and takes place in a different location each year.

Artwork entered into the contest is publicly displayed while a panel of judges reviews each entry and compiles scores to select the winner.

What does the winning artist receive? Here’s how the Fish and Wildlife Service explains it:

“The artist will receive publicity and media recognition. He/she will also travel and be recognized as guest speaker at several prestigious national waterfowl festivals and wildlife art events. The artist receives a pane of his or her Duck Stamps signed by the Secretary of the Interior.”

And perhaps most importantly, “the winner can choose to market the winning image and any other works as ‘by the Federal Duck Stamp artist.’”

That opportunity makes winning the contest a particularly profitable prize for the artist.

For its part, the federal government sells the printed stamps to collectors, conservationists and hunters for $25 each and uses the funds to purchase habitat and wetlands for the National Wildlife Refuge System.

The Million Dollar Duck is distributed on digital home entertainment by Lionsgate, and is available on iTunes and Amazon.com.

Additional information about the film, including a high-definition video preview, can be found here.

Along with several prominent artists, the film preview shows Sam Houston Philatelics vice president Rita Dumaine, Laurie Shaffer of the U.S. Fish and Wildlife Service Duck Stamp Office, and Charles “Chad” Snee of Linn’s Stamp News and the Scott catalogs, who served as a judge in the 2013 contest.