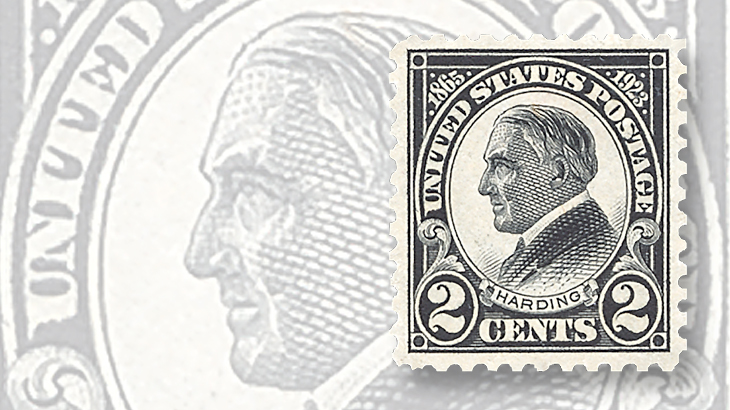 The United States flat-plate printed 2¢ Warren G. Harding stamp perforated gauge 11 (Scott 610) is increasingly difficult to find and worth buying as mint never-hinged plate-number blocks of six and as mint panes of 100.

Warren G. Harding certainly looked the part of president of the United States. Handsome, stern without being forbidding, having gravitas without being leaden, he was at the height of his vast popularity when he died suddenly on Aug. 2, 1923, while on a tour of the Western states.

The shock and grief of the nation was real, although subsequent scandals and revelations have brought his reputation down near the bottom of the presidential list.

As a reflection of the national mourning, the Post Office Department rushed memorial stamps into production, the first of which went on sale a scant 29 days after the president’s death.

The stamp was printed in plates of 400 subjects, which were divided into four panes of 100 for distribution and sale. Plate-number blocks of six in mint never-hinged condition are valued at $47.50.

Plate number blocks are worth full Scott catalog value, and mint panes of 100 sell for $190 or more. Both are good buys at these prices.