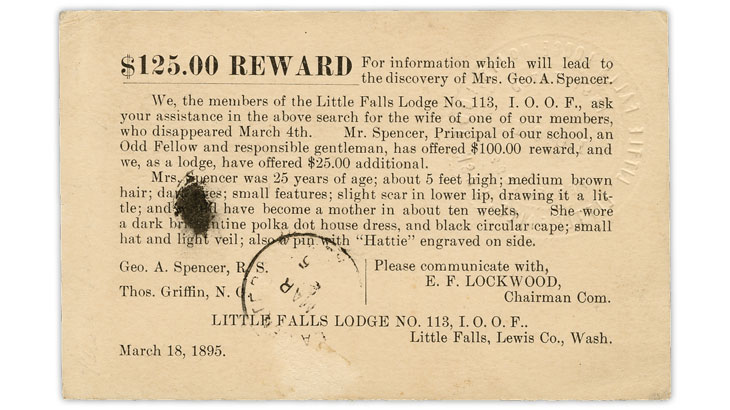 A 1¢ postal card, canceled in March 1895 in Little Falls, Wash., has a notice on the back requesting assistance in finding a missing wife. A $125 reward is offered. Thanks to Linn’s readers, we know what happened to her.

In the U.S. Stamp Notes column in the March 13, 2017, issue of Linn’s, I showed the 1895 wanted postal card illustrated here. It is a plea from George A. Spencer for information about his missing wife.

The printed message on the reverse of this 1894 1¢ Thomas Jefferson postal card (Scott UX12) offered a $125 reward for the missing wife. The card was postmarked March 19, 1895, in Little Falls, Wash.

In the earlier column, I wrote that I was not able to find out what happened to the wife and wondered whether she was ever found. Several Linn’s readers who enjoy genealogical research dug into various documents and websites to uncover more information.

Father Sebastian Glentz of Sheboygan, Wis., found George A. Spencer in the 1900 United States census. Spencer was listed as widowed, living as a boarder in Chehalis, Wash.

Glentz also searched on the website www.findagrave.com, locating Harriet Melissa “Hattie (Berry) Spencer, who died March 4, 1895. She was born Nov. 5, 1869, in Missouri, according to that site.

Patrick McGeehan of Washington, D.C., discovered a biographical profile of George Spencer in the 1903 book A History of The Puget Sound Country by Col. William F. Prosser.

The profile notes, among other things, that Spencer served as principal of a succession of schools until 1898. In that year, he was nominated for and elected to the position of Lewis County superintendent of schools for two two-year terms.

The entry continues: “Prof. Spencer was first married in 1893, to Miss Hattie Berry, a daughter of John Berry of Newaukum; she was a native of Kansas and had been a successful teacher. She was very popular and was a devoted wife to Mr. Spencer, and her death after a year and a half of married life was a sad blow to him.”

Kathleen Wunderly of Bellefonte, Pa., did some digging in newspaper archives and found the unhappy end of young Hattie Spencer’s story.

The March 12, 1895, Morning Olympian included a short entry headlined “A Young Wife Missing: Left Her Husband at Little Falls, a Week Ago After a Quarrel.”

It reads: “The young wife of George Spencer, principal of the public school of Little Falls, left her home a week ago today after a slight disagreement with her husband. The exact time when she left is not known, but it was between 9 o’clock and noon. Mr. Spencer supposed she had gone to her parents, on Upper Cowlitz River, 20 or 30 miles east. She was seen walking on a road in that direction. Mr. Spencer heard from his father-in-law by special courier today, and Mrs. Spencer had not reached her parents’ home. The neighborhood is greatly excited over the disappearance and men are out searching for the woman for many miles east and south of Little Falls.”

The article also stated: “At the time of her disappearance she was in a delicate condition [meaning pregnant], and it was thought that she drowned herself during temporary insanity …”

All of this developed from a random postal card found in a dealer’s stock.

My thanks to the aforementioned Linn’s readers and to Peter Karpoff, Michael Stevens and Sue Spencer Engels, who also supplied useful information.

Caption: A 1¢ postal card, canceled in March 1895 in Little Falls, Wash., has a notice on the back requesting assistance in finding a missing wife. A $125 reward is offered. Thanks to Linn’s readers, we know what happened to her.