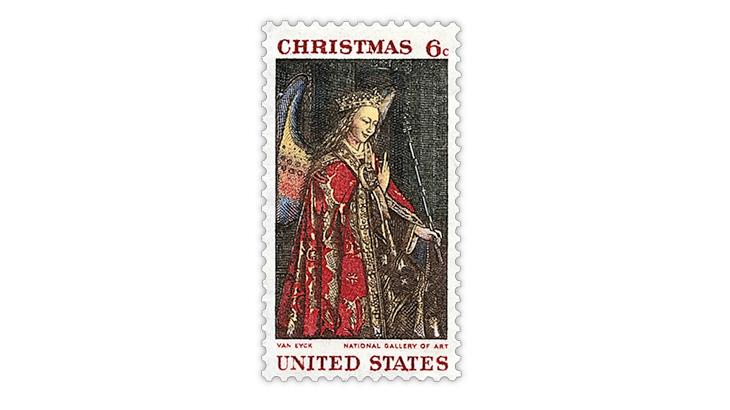 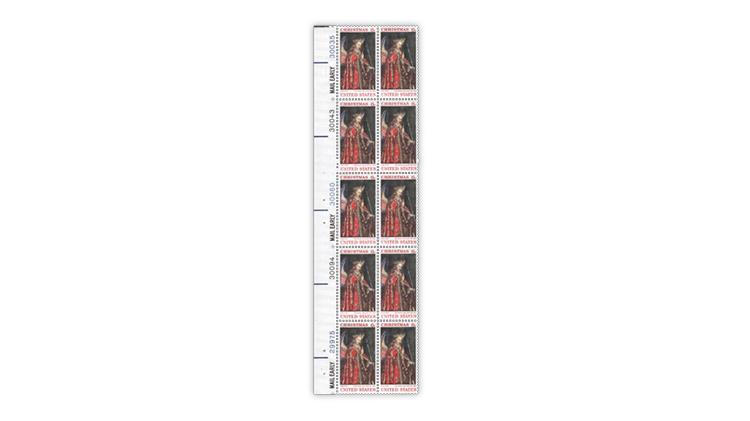 Figure 2. This plate strip of the 1968 6¢ Christmas stamp is a Huck press production, with margin and plate numbers on only one of the four sides of a pane. In this case, the light yellow plate numbers are missing, indicating a missing-yellow error. 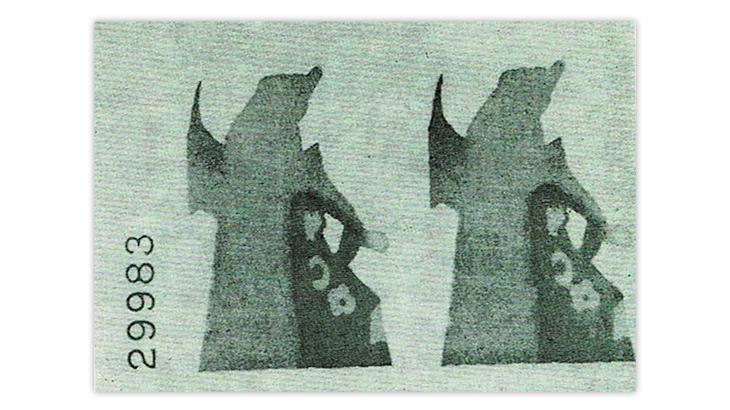 The Scott Specialized Catalogue of United States Stamps and Covers Catalogue lists a light yellow color-omitted error for the 1968 6¢ Christmas stamp showing the angel Gabriel from The Annunciation by Jan van Eyck (Scott 1363a). But the light yellow is almost impossible to see on the normal stamps (1363). Figure 1 shows a normal stamp, and Figure 2 shows the error.

The Bureau of Engraving and Printing produced this stamp on its nine-color Huck press, and multiple plate numbers in different colors were printed in the selvage.

The first of these stamps to be printed had two different yellows: light and dark. At the outset, light yellow was the shading of the angel, the wing at left and the cloak. The yellow plate number was also light yellow.

On the first print run, dark yellow is on top of light yellow in the lower right part of the design, covering the interior of the robe. Figure 3 shows a black-and-white illustration of the intended areas of light and dark yellow.

Quite a few panes of this Christmas stamp were found missing the light yellow because of the ink fountain running dry. However, a contemporary student of U.S. stamp production, Stanley Segal, said, “The error stamps are so similar in appearance to the normal ones that examination did not pick up the error.” Segal was writing in the March 1973 issue of the United States Specialist, published by the Bureau Issues Association, now known as the United States Stamp Society.

But this was not the end of the yellow problems. Segal believed that ...

To read the rest of this column about expertizing, subscribe to Linn’s Stamp News.