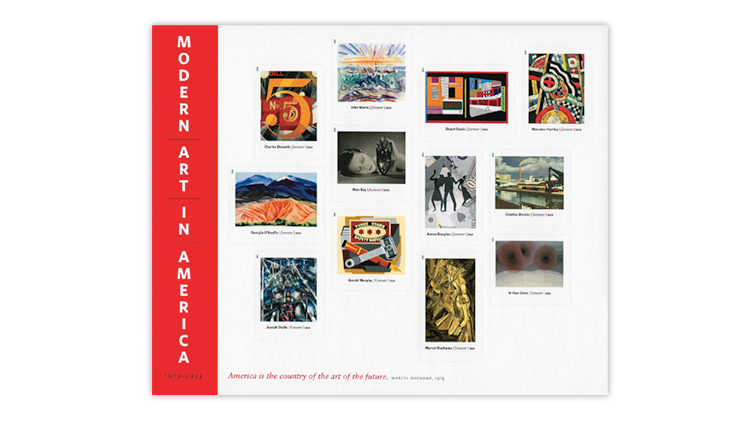 The United States 2013 mint pane of 12 Modern Art in America stamps (Scott 4748) is in demand and selling for more than its Scott Specialized Catalogue of United States Stamps and Covers value.

On March 7, 2013, the U.S. Postal Service issued a pane of 12 Modern Art in America stamps (Scott 4748). The stamps were printed by photogravure in sheets of 48, which were divided and distributed in panes of 12. In addition to the panes with serpentine die cuts gauge 10½, imperforate panes were also issued (Scott 4748m).

Along with featuring works by 12 artists, the pane of stamps commemorates the centenary of the Armory Show.

The American Association of Painters and Sculptors organized the exhibition to showcase modern art works by such artists as Marcel Duchamp, Marsden Hartley and Georgia O’Keefe. The exhibition opened Feb. 17, 1913, at the 69th Regiment Armory in New York City and later traveled to Chicago and Boston.

The Scott Specialized Catalogue of United States Stamps and Covers values the mint pane of 12 at $13.25 against a current postage value of $6.60.

An imperforate mint pane of 12 is valued at $70 in the catalog.

The mint pane with serpentine die cuts is currently selling for more than Scott catalog value. The imperforate mint pane is selling in the $50 to $70 price range. Because of its unusually large size, many of the panes have been damaged or creased. When buying, avoid creased panes.