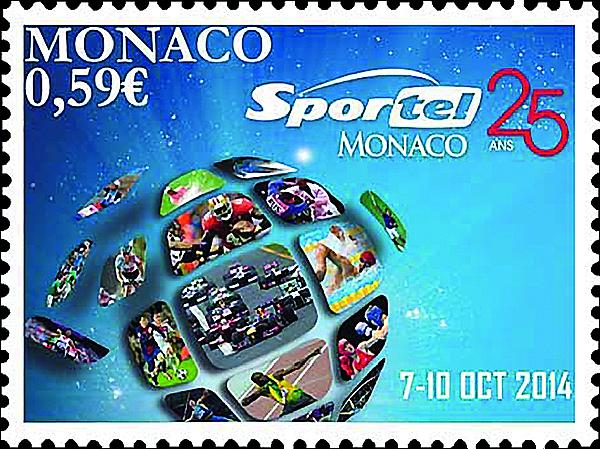 This stamp from Monaco commemorates the 25th anniversary of Sportel, an international sports content media convention. A football scene is included in the design.

American football is one of the sports represented on a new stamp from Monaco.

These conventions are held twice each year, with the spring event taking place in Asia or the Western Hemisphere, and the fall event in Monaco.

This year’s Sportel in Monaco will take place Oct. 7-10 at the Grimaldi Forum.

The design of the €0.59 stamp is based on a promotional image for the event that appears on posters, the convention’s website and other items.

Fourteen sports photographs are included in this image.

The football photograph is near the center of the design, right above a photograph of Formula 1 auto racing. Players from the San Francisco 49ers and the Baltimore Ravens are shown, possibly a photograph from the 2013 Super Bowl game. The 49ers player pictured appears to be Delanie Walker, who now plays for the Tennessee Titans.

Some of the other athletes shown on the stamp are easily identified. For example, pictured at lower left in the design is runner Mo Farah winning the 5,000 meter gold at the London 2012 Olympics.

The tennis player on the far right looks like Roger Federer. His native Switzerland honored him on a stamp in 2007 (Scott 1266).

Jamaican sprinter Usain Bolt is executing his trademark lightning bolt pose in the photograph shown at the bottom of the stamp in the center.

The stamp from Monaco also shows a golfer (perhaps Tiger Woods), a swimmer, a kayaker, a cyclist and a downhill skier.

Two athletes, one from Russia, are shown in the judo photograph, and another two are pictured in the boxing image.

France’s security printer Philaposte printed the stamp by offset in sheets of 10.