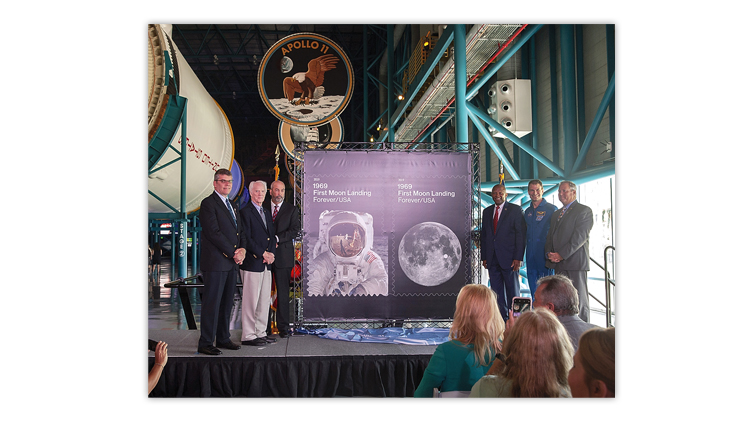 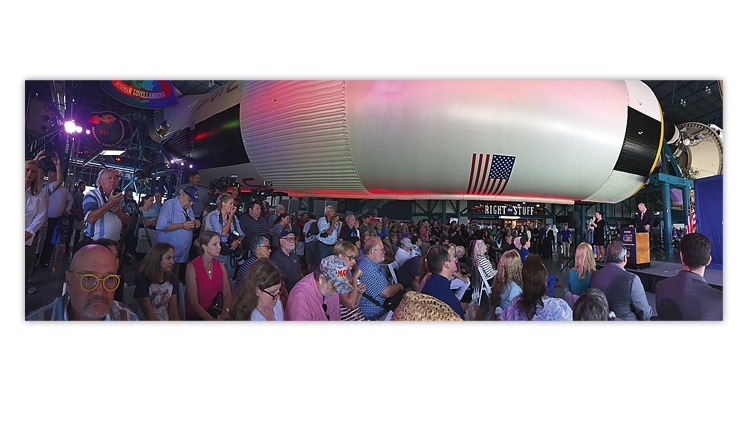 Visitors to Florida’s Kennedy Space Center on July 19 were treated to a first-day ceremony for the two commemorative forever stamps honoring the 50th anniversary of the 1969 first manned moon landing. Photo by Daniel Culbert. 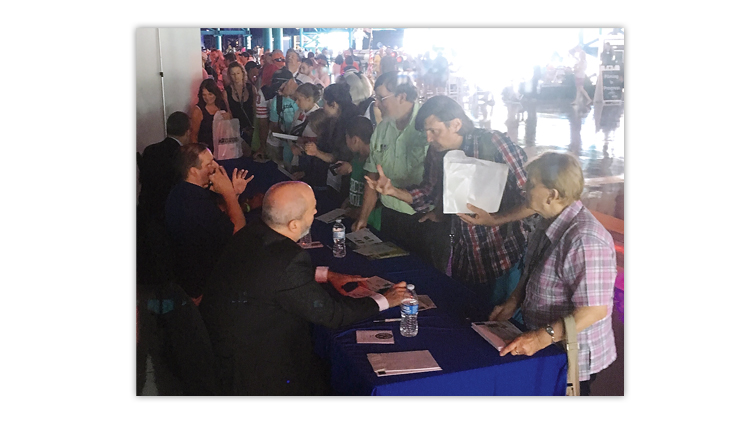 The Postal Service offered first-day covers, souvenir pins, sheets of stamps and more at a retail area on the site of the first-day ceremony in Florida. Photo by Daniel Culbert.
Previous
Next

Linn’s Stamp News reported in its June 24 issue that the United States Postal Service was offering a limited number of free tickets to the July 19 first-day ceremony for the Moon Landing Anniversary stamps.

I requested tickets after reading the article, and did not hear anything until a confirmation email arrived July 11 to provide instructions about picking up the tickets, which normally cost $57. An additional surprise was that a free parking voucher with a $10 value was also supplied.

The tickets allowed me and a guest to spend all day at the John F. Kennedy Space Center Visitor Complex at Merritt Island, Fla.

Stamp ceremony attendees rode to the venue on a special event bus that arrived in 10 minutes. Visitors were given a ceremony program and commemorative pin showing one of the two stamp designs. Asking for a second pin easily completed the set.

A similar commemorative stamp pin set was among the different products sold at the USPS sales area on site, and it is also offered on the USPS retail site as item No. 479126 for $18.95. The retail set comes on a mounting card with a stamp and first-day cancel.

Both pin sets show the same stamp designs, but with different frames and finishes on the pins.

The sales area, with merchandise displayed on one side, was congested with buyers. Besides the Moon Landing Anniversary items, some Sally Ride forever stamp covers and stamps were available.

Two USPS employees offered first-day cancels at a separate table, so customers looking for postmarks and souvenirs had to wait in two different lines.

At the limited seating area, I sat next to Gregory Revera, the patent attorney whose 2010 photograph of the 97 percent full moon is shown on one of the two stamps. He took the photo from his backyard in Alabama.

Approximately 250 to 300 people were seated or standing adjacent to the ceremony stage, with additional visitors streaming in under the Saturn V rocket that makes up the bulk of the Apollo/Saturn V Center.

As the ceremony began, Andrea Hayes of the USPS sang the national anthem as a color guard of the Merritt Island JROTC presented the colors.

Protze told the crowd that he was proud of recent updates to the center’s Apollo exhibits and the addition of a new statue of the Apollo 11 crew. In addition, the center’s new Moon Tree Garden has been replanted with sycamore trees that traveled to the moon as seeds.

Monteith next introduced Tom Marshall, the Postal Service’s general council and executive vice president, who served as dedicating official. Marshall described the new stamps as celebrating “the 50th anniversary of one of our country’s greatest scientific and technological achievements,” and spoke of how NASA fulfilled President Kennedy’s 1961 call to action to land a man safely on the moon.

Marshall encouraged the audience to explore astrophilately — the study of space-related stamps — as a way to learn about our nation’s space program.

Marshall said the new stamps are “a fitting tribute to everyone who supported the Apollo 11 program.”

Manning spoke of the space center’s history and achievements and pointed out that “NASA is once again called to land American astronauts, including the first woman and the next man, on the moon by 2024.” He provided glimpses of future manned space efforts by describing the Artemis program, which will use the new Orion space capsule to travel to the moon.

Russell L. (Rusty) Schweickart, lunar module pilot on the 1969 Apollo 9 mission, described the first manned moon landing as a “big moment” of “big history,” which began with the big bang and goes forward to the present.

He traced the development of our universe over billions of years, from the big bang to the evolution of physics and chemistry to biology.

He thanked the Postal Service for creating the new stamps and for making available to people a contact with “that great sweep of big history.”

NASA scientist and astronaut Stanley Love concluded the day’s remarks with a few words about what NASA has planned for the future. Love is involved in creating cockpit displays and controls for Orion and other spacecraft.

Love reminded the crowd that the United States has had a continuous human presence on the International Space Station for almost two decades, and he spoke some more about future missions and the Artemis and Gateway programs.

After the ceremony, the crowd flocked back to the sales area and the autograph table. Some of the NASA ceremony participants left to attend other events, so the signatures of Schweickart and Love will be missing from most programs.

Photographer Revera and vocalist Hayes were among those participating in the signing.

The location of the ceremony gave all of the attendees a chance to review the space center exhibits, which show where we have been, and where we are planning to go with space exploration and the technological developments that can impact the quality of our life here on Earth.