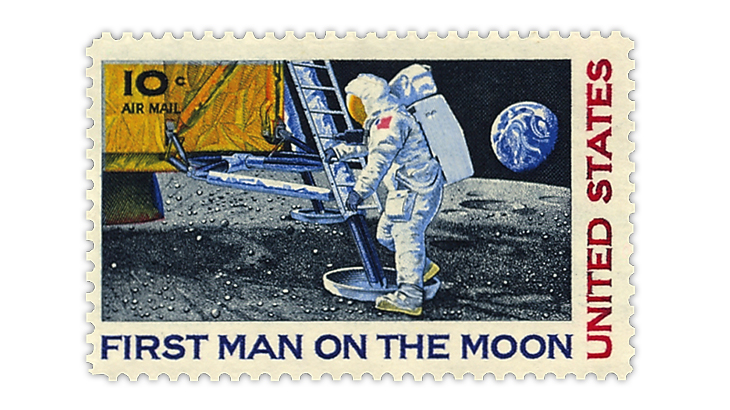 The cartoon caption contest stamp for March is the 1969 10¢ Moon Landing airmail stamp. Entries must be received by March 22 for a chance to win a prize. The rules are in the accompanying article.

This year will mark the 50th anniversary of the first landing of astronauts on the moon.

Two of the three men who left Earth on the July 16, 1969, Apollo 11 mission, Neil Armstrong and Edwin “Buzz” Aldrin, were the first humans to walk on the moon, on July 20. Astronaut Michael Collins continued to orbit the moon in the Apollo 11 Command Module.

During the Apollo program, 12 astronauts walked on the moon between 1969 and 1972. But it was Armstrong’s first step on the moon that captured the attention and the imagination of the world.

That moment is captured on the stamp, which will be the March cartoon caption contest subject.

Armstrong’s first words on the moon, “That’s one small step for man, one giant leap for mankind,” are hard to beat for marking the occasion in a formal way, but your challenge is to come up with something a bit less serious.

You are invited to put yourself in the space suit and consider what you might be thinking or saying as you take your historic first step. You can address the space program, the mission itself, the politics of the era, how the mission relates to stamp collecting, or anything else you think is appropriate.

For each winner, the prize will be a 13-week subscription to Linn’s (a new subscription or an extension). Entries must reach me no later than March 22.