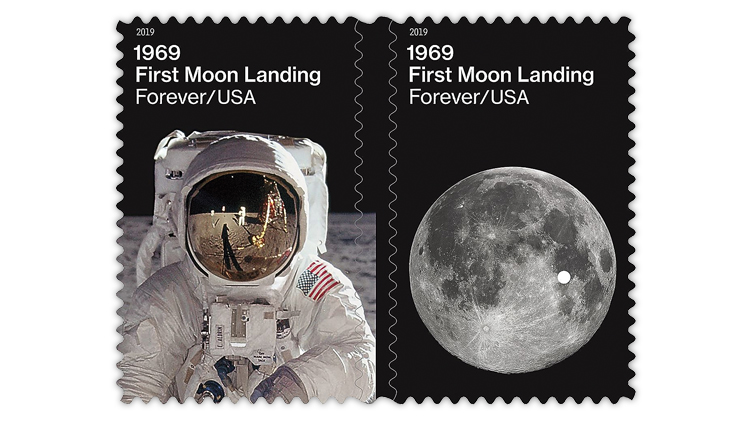 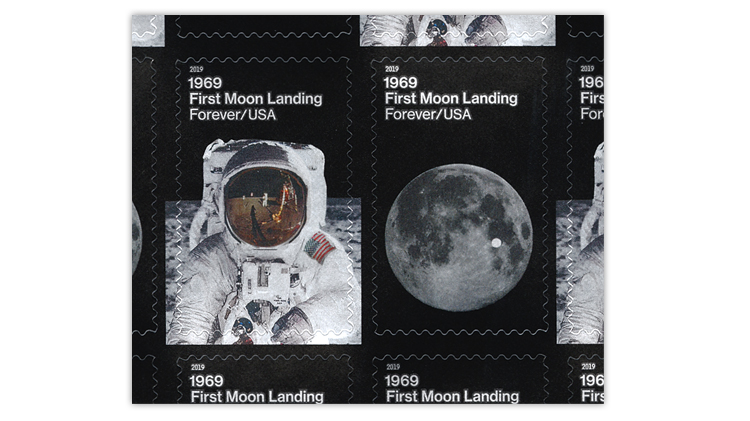 A digital scan of the issued Moon Landing Anniversary stamps shows the illustrations are darker than the publicity photos, but the silver color is not as apparent in this reproduction as it is on the actual stamps. 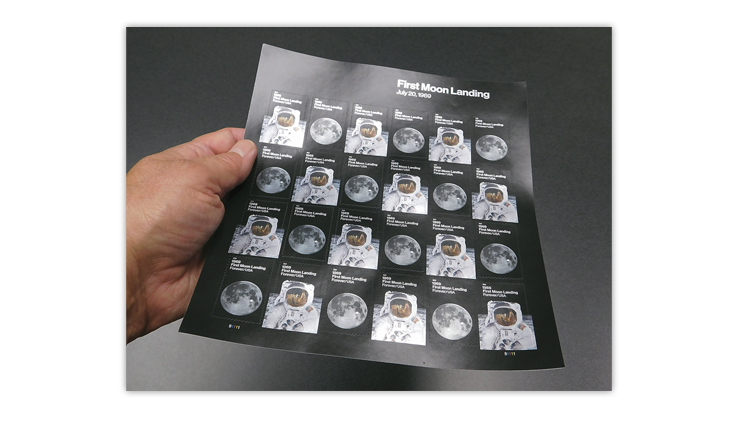 The full pane of 24 Moon Landing Anniversary stamps is phosphor coated from edge to edge. Though the silver effect on the stamps does not reproduce well in photographs, it is a significant feature of the issued stamps. 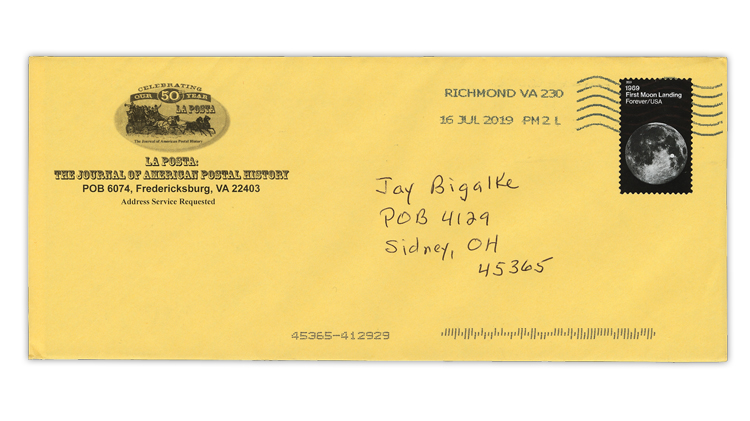 An early postal use of the Moon Landing Anniversary stamp postmarked July 16 in Richmond, Va. The two-stamp set was issued July 19 with a first-day ceremony at Kennedy Space Center in Florida.
Previous
Next

Two Moon Landing Anniversary forever stamps were issued July 19 in Florida, and if you haven’t seen the actual stamps, you might be surprised by their appearance.

A silver color dominates the images on the nondenominated (55¢) stamps, creating a reflective effect that doesn’t reproduce well in photographs.

The United States Postal Service offered up a couple of different publicity images of the stamps before the issue date. A cropped version of NASA’s color photo of astronaut Buzz Aldrin is shown on one stamp. The other includes Gregory Revera’s photograph of the full moon with Tranquility Base, the 1969 landing site, marked by a large white dot.

But on the issued stamps, the printed areas that are white or gray on the publicity photos have a silvery shimmer. The effect is most noticeable on Aldrin’s spacesuit.

Unrelated to the silver color, the pane of 24 stamps has overall phosphor tagging applied, which means the chemical taggant covers the entire surface of every stamp and all margin paper. Under shortwave ultraviolet light, the entire pane glows green from edge to edge.

Taggant application can have a slight muting effect on colors, even though the phosphor is almost invisible to the naked eye. Combined with the silver ink in the printing, it makes the actual stamps appear noticeably darker than the promotional photos.

The Moon Landing Anniversary stamps are offset-printed by Banknote Corporation of America, one of two contract printers currently used by the Postal Service to fulfill its stamp-printing requirements.

The plate numbers on stamp panes seen by Linn’s Stamp News show the letter B printed in silver followed by the number 1 printed four times, in cyan, magenta, yellow and silver, respectively.

Though black ink covers much of the stamps and the pane’s margin areas, there does not appear to be a corresponding black 1 among the plate numbers.

Then again, against a black background, a black number probably wouldn’t show up even if it was included.

The Moon Landing Anniversary stamps were launched a little early from at least one post office.

The envelope is franked with the Moon stamp from the Moon Landing Anniversary set. The cover has a sprayed-on July 16 postmark from Richmond, Va. The official issue date for these stamps was three days later, on July 19.

Martin bought the stamps at a Fredericksburg, Va., post office and then realized the issue date was a few days away.

This is the earliest known use for these stamps to date.

If you think you have an early use cover of any new U.S. issue, Linn’s editors need to see the actual item to verify it. Actual covers allow for better reproduction so that the stamp and cancel date can be clearly pictured.