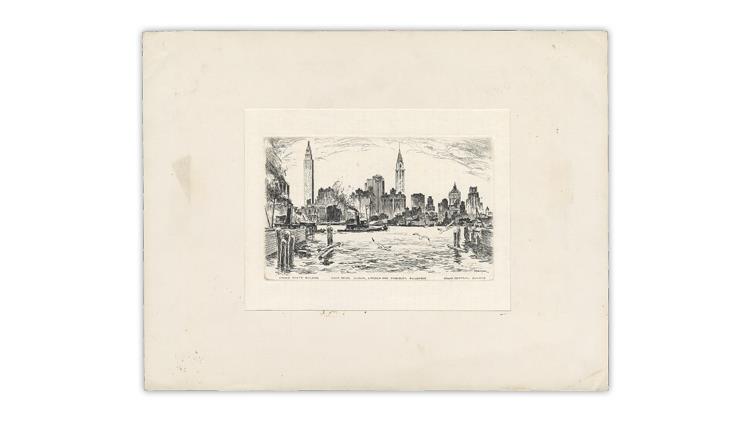 Figure 1. This 1965 Christmas card sent by philatelic legend Harry Lindquist shows an etching of the New York City skyline in 1957 by well-known artist Paul Berdanier. Fine art was a characteristic of Lindquist’s cards. 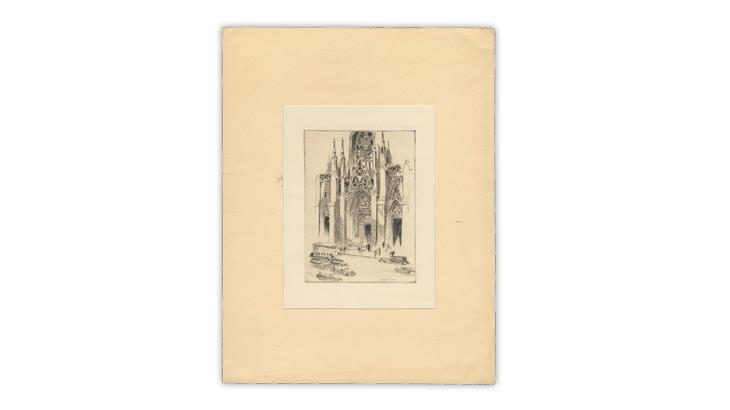 That 1949 card shows an etching by Harry Peckmore picturing a scene of Wall and Broad streets in New York City.

At the time I wrote that U.S. Stamp Notes column, I did not know how many Lindquist Christmas cards might exist or if additional examples maintained the quality level of the 1949 card.

William A. Jones, a former Scott catalog associate editor, responded, saying he had a run of 18 Lindquist Christmas cards that extends from 1948 well into the 1960s. Jones also allowed me to make photocopies of his set of Lindquist cards.

Unfortunately Harry and Marion Lindquist did not date most of their cards, and the envelopes in which they were sent were not kept. But the cards themselves are a treasure — masterpieces of art, most relating to New York City, where Lindquist had his offices. Each card came with a fulsome description of the scene portrayed.

Next I heard from Linn’s reader William Passon, who sold me the eight cards he had. Two of these magnificent Lindquist Christmas cards are shown in this column.

Figure 1 shows the 1965 card, featuring an etching by Paul Berdanier (1879-1961). It is labeled at the bottom “Empire State Building,” “Daily News, Chanin, Lincoln and Chrysler Buildings,” and “Grand Central Building.” The text inside the card titles this scene “New York Skyline in 1957.”

In the first paragraph of the card’s text Lindquist wrote: “In earlier Christmas seasons we have greeted our friends with etchings depicting scenes of Old New York or of the contemporary era. This year of 1965 we decided to select a scene in what might be called the intermediate period, for while it is only a few years since the skyline of New York looked like this, the view is quite different today, an example of the fast-changing appearances of many sections of the city.”

The text continues for another 10 paragraphs, describing the area, the buildings and changes to the city over time.

The 1968 card in Figure 2 shows a view of St. Patrick’s Cathedral from 5th Avenue, chosen as Lindquist says in his write-up, “… in memory of the late Francis Cardinal Spellman [a fellow stamp collector of note] and in tribute to his good friend, Archbishop Terence J. Cooke, who has succeeded him as head prelate of this diocese, and who is a Founder Member of the Cardinal Spellman Philatelic Museum.”

The card’s insert waxes eloquent about the cathedral for several paragraphs, ending with “And now, on this Christmas of 1968, I greet you once again with my constant hope: May the Good Lord Bless and Keep You ‘til we meet again.”

The etching of the cathedral is signed “Peirce,” who might be Waldo Peirce (1884-1970) or Gerry Peirce (1900-1968), but I am not certain as Lindquist does not identify him by anything other than his surname.

The cost of producing Lindquist’s Christmas cards was likely high befitting their quality. A complete collection, which may extend beyond the 18 I know of, would entitle the owner to bragging rights.