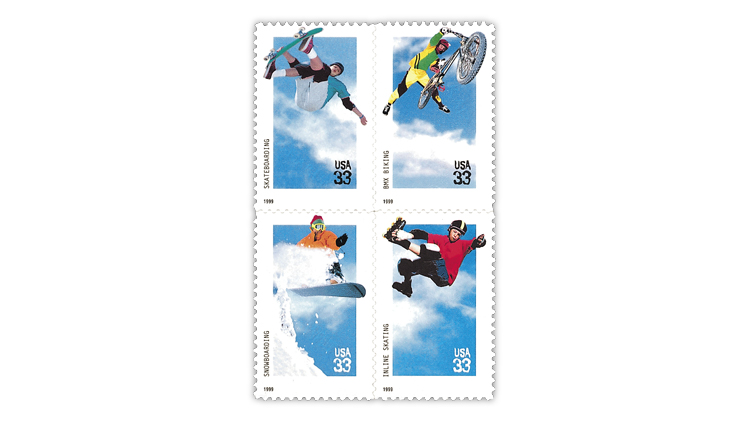 The designs of the four 1999 Extreme Sports stamps were based on photographs of living subjects. They are included in the author’s list of 80 U.S. stamp issues showing more than 100 living people.

I keep track of living people pictured on U.S. postage stamps, and I discovered four more while perusing old issues of Stamp Collector, a stamp newspaper that ceased publication in 2004. A report in a 1999 issue was titled “Xtreme stamps sport ‘morphed’ faces.” It seems that the figures shown in action on the Extreme Sports stamps were based on photographs of living subjects.

To meet the requirement that living people not be honored on U.S. postage stamps, computer technology was used to alter the facial features of the subjects, according to the article. In addition all product names and logos were removed from the images shown on the stamps.

I had long suspected that the images on the stamps started as photographs of living people, but now it is confirmed.

To receive a copy of my list of living people on U.S. stamps as an email attachment, Linn’s readers can send requests to me, John Hotchner, at jmhstamp@verizon.net. Requests for a printed copy should be mailed to me at Box 1125, Falls Church, VA 22041-0125. Kindly include a business-size envelope with the correct postage on it.