More than 35,000 value changes made in 2016 Scott Classic Specialized catalog 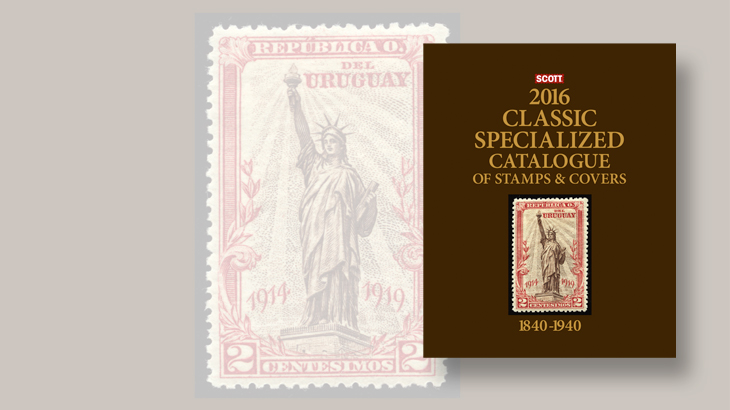 The 2016 edition of the Scott Classic Specialized Catalogue of Stamps and Covers 1840-1940, the 22nd edition, widely regarded as the best single-volume catalog for the classic-era stamps of the world, incorporates more than 35,000 value changes. Of these changes, 15,850 affect listings found only in the Classic Specialized catalog.

Thousands of value changes, hundreds of new listings, and myriad editorial improvements, including many hundreds of revised and expanded listings, can be found in the 2016 Scott Classic Specialized Catalogue of Stamps and Covers 1840-1940.

The 2016 edition of the catalog, the 22nd edition, widely regarded as the best single-volume catalog for the classic-era stamps of the world, incorporates more than 15,850 value changes. When all the value changes made in the six-volume 2016 Scott Standard Postage Stamp Catalogue listings are included, the total surges to more than 35,000 changes.

The 2016 Scott Classic Specialized catalog reflects an intense review of classic stamps of Russia. The 2,464 value changes reflect both substantial increases and decreases, depending on the issue.

Values for Cuba have undergone a thorough review, from the stamps issued under Spanish Dominion up to United States intervention (the Puerto Principe issue). Almost 700 values have changed, with significant increases throughout. The 1855-56 ¼ reales plata on 2rp carmine stamp (Scott 5) jumps from $1,200 unused to $1,500, and from $210 used to $400.

Many of the French Africa countries were reviewed during the 2016 Scott catalog season, with mixed results. Senegal saw mostly decreases, along with a few increases here and there.

Significant increases are seen for select stamps in Gibraltar’s 1904-12 set. The 1-penny violet stamp on red paper (Scott 50) doubles in value for an unused example, from $15 to $30.

Several editorial enhancements can be found not only in Cuba and Russia, but throughout the catalog.

Among the many editorial improvements are substantially revised listings for the 1911-21 Iran Ahmad Shah First Portrait issue (Scott 481-500), along with updated values. New listings for this issue recognize two heights of the central (engraved) vignette, 23 millimeters (dry printing) and 22½mm (wet printing), and the different gauges of perforations.

Postal fiscal stamps for Chile (Scott AR1-AR12) are listed for the first time.

In Cape of Good Hope, under stamps issued in Vryburg under Boer Occupation, a footnote has been added for Scott N1b-N4b stating that the italic “Z” variety occurs in one position in the setting of 60.

Many new minor listings have been added to the Official stamp listings of the India Feudatory State of Travancore.

The Scott editors continue efforts to break out paper varieties where it makes sense to do so. Southern Nigeria’s 1904-07 Edward VII set is only one example that has been reorganized by ordinary and chalky papers.

New color images have been added to Armenia handstamps and surcharges that will make the stamps easier to identify.

As always, we encourage users of the catalog to pay special attention to the Number Additions, Deletions & Changes listings in the catalog.