Most influential philatelists to tell their epic stamp stories 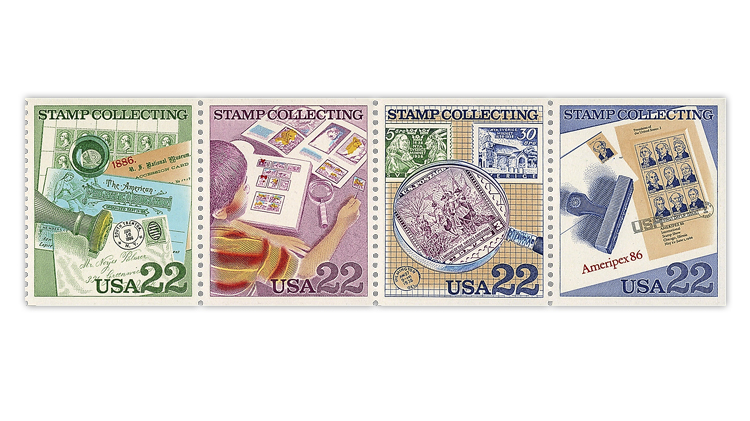 In January, Linn’s will publish a list of most influential philatelists winnowed down from a list of 175 nominees. Shown is a strip of four United States stamps issued in 1986 to celebrate stamp collecting (Scott 2198-2201).

The stamp collecting community is a tight one, and we are all working together to promote the hobby to the world.

In honor of those efforts, the Linn’s Stamp News editorial team is planning a special edition publication to be mailed with the January 2022 monthly magazine.

The 2022 edition of the Most Influential Philatelists and Their Epic Stamp Stories will recognize a number of individuals who have had an impact on the hobby in the past couple of decades.

We set a few parameters for the list of approximately 175 individuals worldwide whom Linn’s editorial team has envisioned for this recognition. The list will recognize people who are living. Additionally, this edition of the publication will recognize only a portion of the people on the nomination list.

Those to be recognized include collectors, dealers, auctioneers and individuals who are professionally involved in hobby organizations and postal administrations.

So how will we winnow down the list for the publication? That’s where we are turning to the stamp collecting community to help us with that task. Even though the Linn’s editorial team is selecting the honorees, we are interested in our readers’ opinions on who should make the list.

Collectors are encouraged to go online to vote for the people they feel strongest about for inclusion.

Click the checkbox for as many individuals as you would like to see receive this honor. Voting will be open for 30 days.

It is inevitable that we left some names off the list, which is why we are also including a write-in spot on the ballot.

The results will assist Linn’s in picking individuals for the final list of honorees. Individuals will be notified and interviewed (and sworn to secrecy until the magazine is published in January).

The current plan is to have the collectors tell us about themselves and also to share their epic stamp stories. Those details will come together throughout the interview process over the next couple of months.

The general concept for this publication was championed by Amos Media Co.’s president Rick Amos. Earlier this year, our sister publication, Coin World, celebrated its 60th anniversary with a similar publication honoring the most influential people in numismatics from 1960-2020.

Vote early, and I look forward to seeing the results to get this project rolling to give credit to those in the hobby who really have an impact on what we do and love.