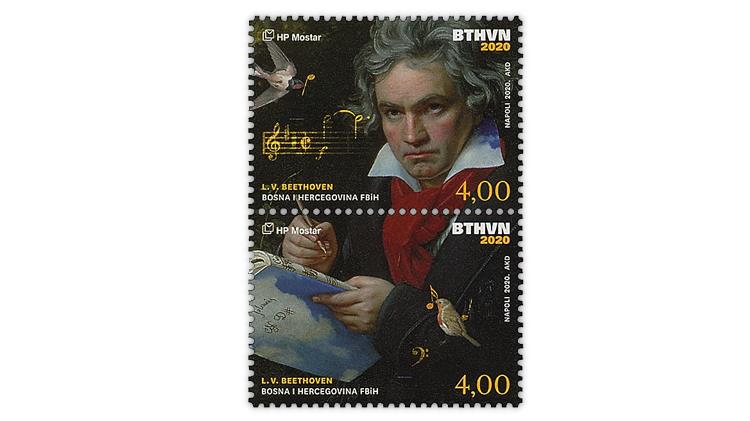 One of the numerous 2020 stamp issues celebrating Beethoven’s 250th birthday anniversary received the Yehudi Menuhin trophy for the most popular music stamp of the year. Manlio Napoli designed this pair of stamps for Croatian Post Mostar (one of three com 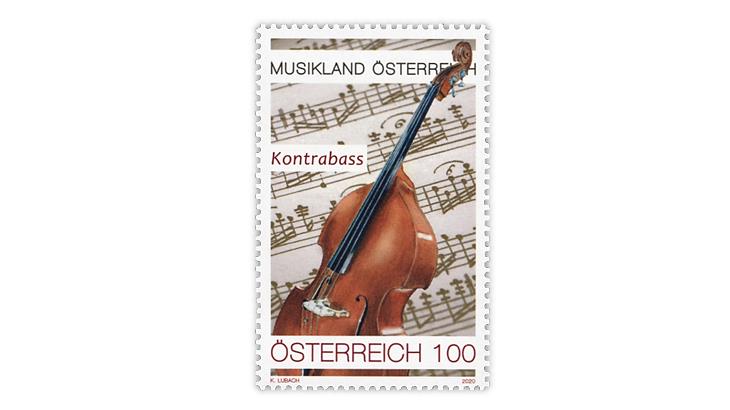 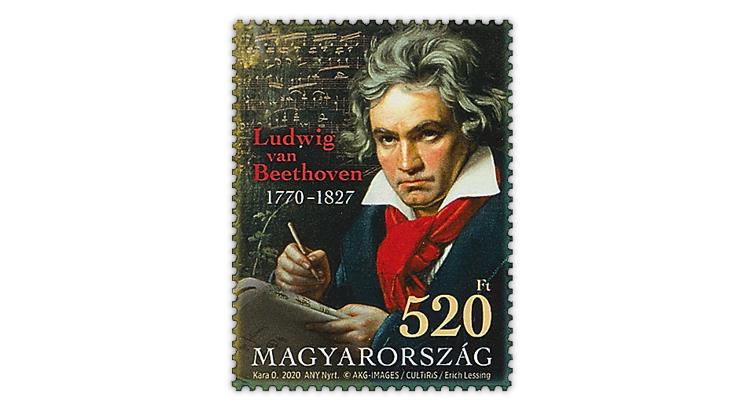 Hungary’s commemorative stamp for Beethoven’s 250th birth anniversary came in third in the poll for the best music stamp of 2020.
Previous
Next

Stamps honoring the 250th birth anniversary of Ludwig van Beethoven (1770-1827) placed first and third in the poll for the most popular music stamp of 2020 organized by Motivgruppe Musik, the International Philatelic Music Study Group.

The Beethoven issue from Croatian Post Mostar (one of three companies that provide mail service in Bosnia and Herzegovina) topped the poll. The issue’s designer, Manlio Napoli, received the group’s Yehudi Menuhin trophy.

The Beethoven commemorative from Hungary came in third in the poll. Placing second was an Austrian stamp featuring the double bass.

Collectors from 59 countries participated in the online poll, which included 66 stamps from 51 postal administrations.

The Croatian Post Mostar received 176 votes, 6.05 percent, for its pair of Beethoven stamps designed by Napoli. The stamps are se-tenant (side-by-side) in a pane of eight stamps and two labels issued Dec. 16, 2020 (Bosnia and Herzegovina [Croat Administration] Scott 423).

In its press release, Motivgruppe Musik said about these 4-mark stamps, “Beethoven’s deeply rooted closeness to nature inspired the designer to subtly complement the famous Beethoven portrait by Joseph Karl Stieler with a barn swallow and a robin inspiring the master with their singing.”

The stamps in the series combine musical instruments with music that features them. Shown behind the double bass on the 2020 stamp is part of Austrian composer Carl Ditters von Dittersdorf’s (1739–99), handwritten score for Double Bass Concerto No. 2 in E-flat major.

Hungary’s 5.20-forint Beethoven stamp issued March 4, 2020 (Scott 4544) received 148 votes, 5.09 percent. The design by Orsolya Kara is based on Stieler’s Beethoven portrait and also shows a detail from one of the composer’s musical manuscripts.

Two other Beethoven stamps also were included in the poll’s top 10, with Germany’s stamp (Scott 3144) placing fourth and Israel’s commemorative (2271) coming in 10th.

Rounding out the top 10 are a Belgian stamp saluting dance in the Roaring Twenties (fifth place, Scott 2929d), a Christmas stamp from Ukraine showing carolers and a pipe organ (sixth, 1261), an Australian stamp depicting the Sydney Opera House (seventh, 5218), a stamp from San Marino picturing a cat and violin (eighth, 2063), and Great Britain’s stamp displaying the album cover art for Queen II by the rock band Queen (ninth, 3994).

Motivgruppe Musik has conducted its annual poll to determine the most popular music stamp of the year since 1980.