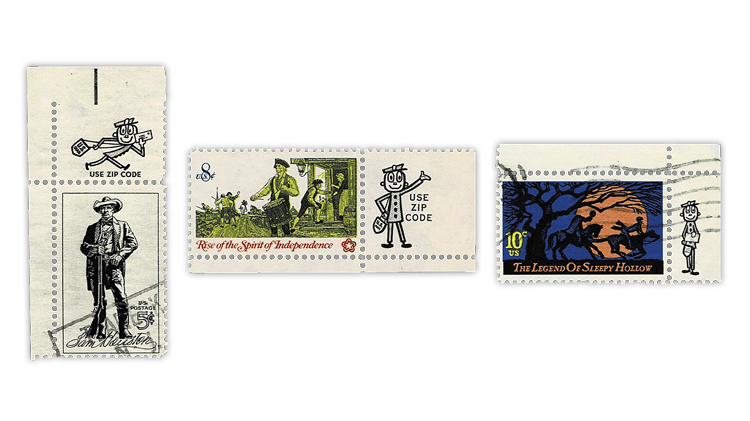 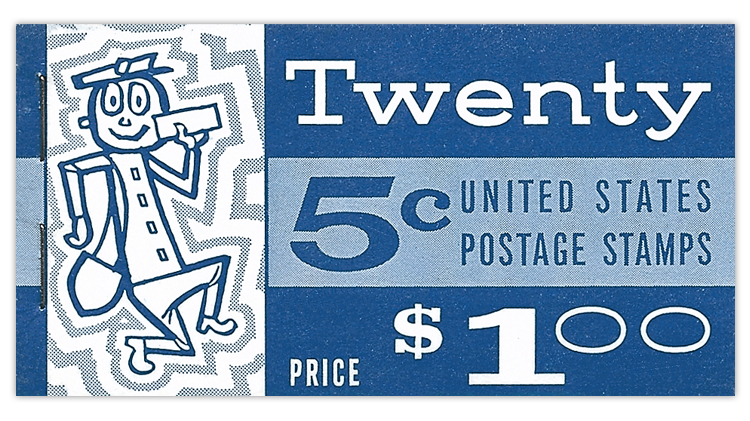 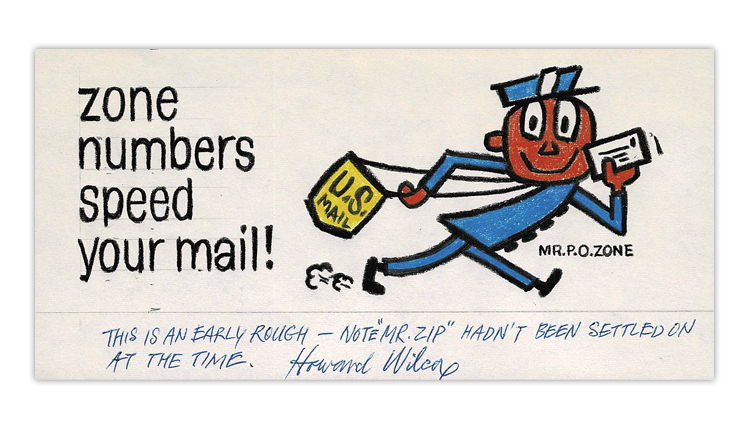 Figure 3. Howard Wilcox created the cartoon image that would be adopted by the U.S. Post Office Department as the prototype for Mr. ZIP, the symbol of the Zone Improvement Program introduced in 1963. 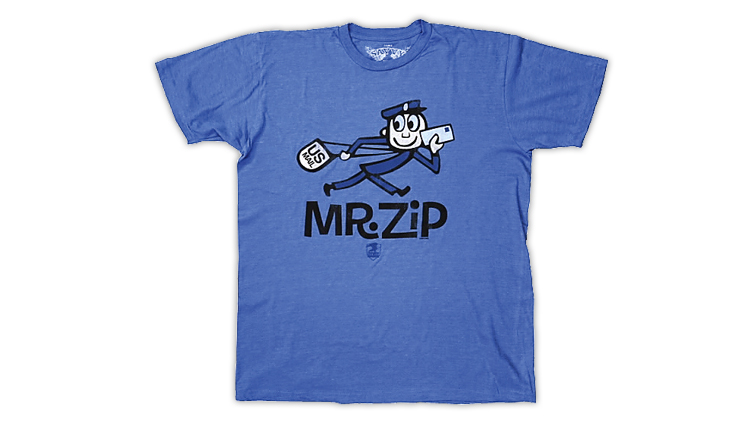 Figure 4. Mr. ZIP is featured on this T-shirt, an officially licensed product of the U.S. Postal Service. 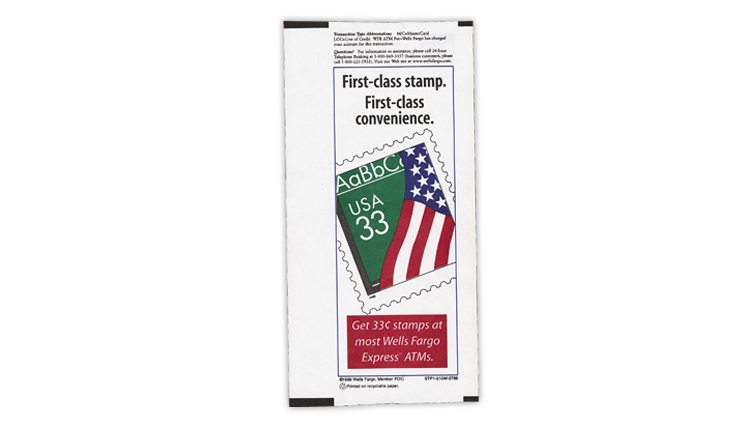 Figure 5. The front of an ATM receipt form picturing a drawing of the 33¢ Flag Over Chalkboard stamp of 1999. To request a gratis example of the form, see the accompanying column for details. 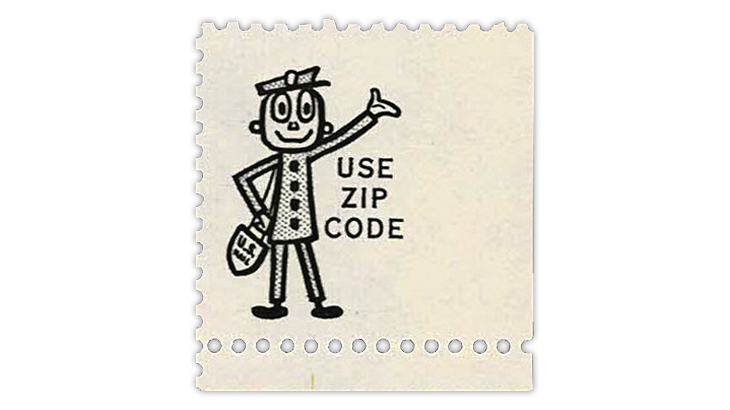 The cartoon caption contest image for November is a Mr. ZIP marginal marking. Entries must be received by Nov. 22 for a chance to win a prize. The rules are in the accompanying article.
Previous
Next

For almost 33 years the cartoon caption contests (the first one appeared in the Dec. 8, 1986, issue of Linn’s) have used postage stamp designs as the centerpiece for readers to supply their own lines. But for November, I am featuring a post office hero who has not made it onto a postage stamp: Mr. ZIP.

The face of the promotional campaign when the Zone Improvement Plan was introduced in 1963, Mr. ZIP was born from the need to capture the public’s attention. Gaining acceptance in changing the way letters were to be addressed and reversing decades of ingrained practice were seen as major challenges.

Mr. ZIP is now 56 years old, but he maintains his youthful good looks.

Although he never appeared on a postage stamp, he did appear in the margins of panes of United States stamps for many years after his introduction with the objective of reminding mailers to use the five-digit ZIP code.

An original essay for the image of Mr. ZIP is shown in Figure 3 as an “early rough” by artist Howard Wilcox, the son of a letter carrier and a staff member of the Madison Avenue advertising agency Cunningham and Walsh Inc., a Madison Avenue ad firm, in New York City.

Note that the name Mr. ZIP had not yet been christened. On the essay he is called “Mr. P.O. Zone,” not as catchy as Mr. ZIP.

Ultimately Mr. ZIP came to represent one of the most successful change programs in U.S. Post Office Department history.

Although he is fading from memory, the U.S. Postal Service brings him back now and then. His latest return to glory is on a T-shirt advertised in the latest issue (Vol. 24 Fall) of USA Philatelic, a quarterly bulletin of new stamps and products subtitled “The Official Source for Stamp Enthusiasts.” Figure 4 shows the T-shirt, which is also is available from the online postal store.

I am renewing my previous offer of an example of the automatic teller machine receipt showing the U.S. Flag and Chalkboard stamp. An example is shown in Figure 5.

Steve Schumann was able to obtain a roll of these receipts and was kind enough to send it to me, knowing that many Linn’s readers would like to have an example for their collection to go along with the actual 1999 33¢ Flag and Chalkboard ATM stamp (Scott 3283).

There is no cost, other than sending an addressed envelope franked with 55¢ in postage to John Hotchner, Box 1125, Falls Church, VA 22041-0125. However, it may be a few weeks before the receipts are sent out.

For the November cartoon caption contest, I am using the Mr. ZIP marginal marking from the aforementioned 1973 8¢ Bicentennial stamp.

Put yourself in Mr. ZIP’s uniform and tell me what you think he might be saying or thinking, about the ZIP code program, his contribution to postal operations, the current state of the Postal Service, philately, or whatever else you would like to address.

For each winner, the prize will be a 13-week subscription to Linn’s (a new subscription or an extension). Entries must reach me no later than Nov. 22.

Daniel Webster honored in letter and on postage stamps