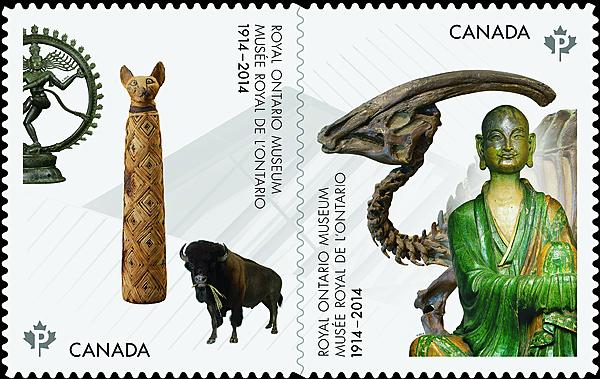 Canada Post honored the centennial of the Royal Ontario Museum April 14 with two new commemorative permanent-rate stamps issued in a booklet of 10, a souvenir sheet of two, and three international-rate picture postal cards.

The museum has undergone many renovations and reorganizations since it was first opened to the public March 19, 1914. In June 2007, an extension, known as the Michael Lee-Chin Crystal, was opened.

A pale image of part of the museum building extends across both stamps, with different artifacts from the museum shown in the foreground of each design.

The stamp at left includes a Shiva Nataraja sculpture, a mummified cat and a bison. The stamp at right pictures the skeleton of a dinosaur (Parasaurolophus walkeri) and a Luohan statue.

The souvenir sheet shows additional artifacts in the selvage.

The stamps were designed by Gerald Querubin of Entro, and Doreen Querubin served as the art director.

The nondenominated (85¢)stamps and souvenir sheet were printed by Lowe-Martin.

The stamps were printed by five-color offset lithography on Tullis Russell paper, with general tagging on all four sides.

The self-adhesive booklet stamps have serpentine die cuts on all four sides. The souvenir sheet is perforated about gauge 13 and has moisture-activated adhesive.

Printing quantities for the issue are 3 million booklet stamps and 150,000 souvenir sheets.