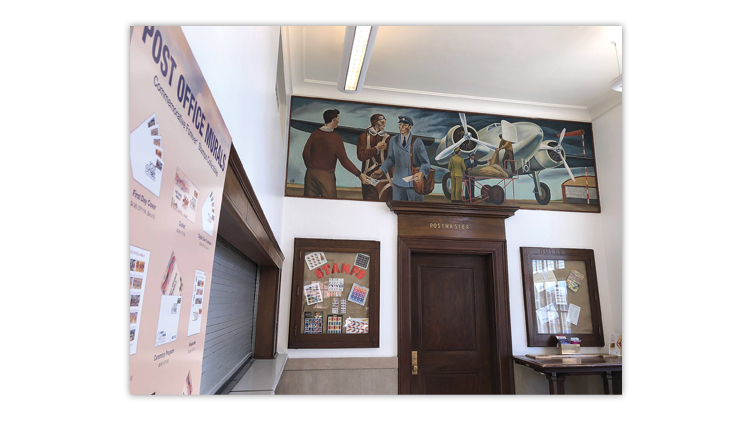 The mural at the Piggott, Ark., post office is featured on one of the five Post Office Mural stamps issued April 10. A large poster promoting the new stamps hangs on the wall to the left of the mural. Photo by Jay Bigalke.

The rural Arkansas community of Piggott served up some Southern hospitality for the first-day ceremony of the Post Office Murals stamps.

The five forever stamps were issued April 10, and the mural at the Piggott post office is pictured on one of them.

How big of a deal was this event for the town of approximately 3,600? Huge. About 300 people from Piggott showed up for the ceremony. And while waiting in line to buy the stamps, they came up and introduced themselves just to say hello.

Weeks prior to the event, the cement steps in front of the post office were replaced, and the mural received a professional touch-up. The mural is stunning in person. A photo, which does not do it justice, is shown above.

The city temporarily shut down a section of the state highway in front of the post office so the event could take place there.

Brooklyn Harmon, a fourth-grade student at Piggott Elementary School, read her winning essay on post office murals at the ceremony. If you can take a moment to listen to the ceremony on the Postal Service’s Facebook page, www.facebook.com/usps, I encourage you to do so — especially Harmon’s speech. She captured the story of post office mural art, the New Deal and more in a succinct way.

Her comment left me wondering where such art would be displayed in today. I feel the post office would still prevail because it is a staple of the community that binds the nation together.