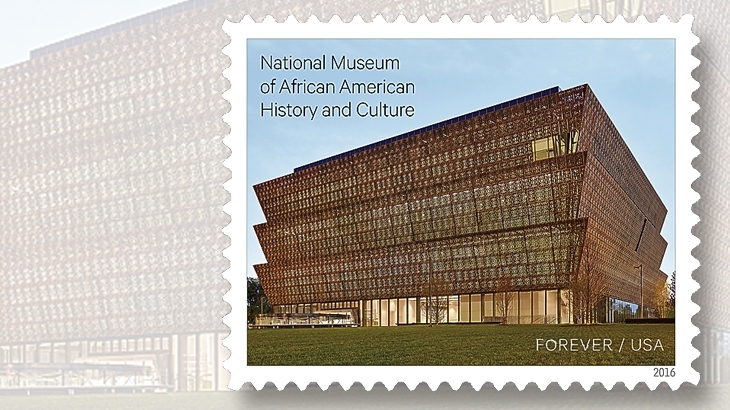 Originally slated to be issued Sept. 24, the commemorative forever stamp honoring the National Museum of African American History and Culture is now scheduled for an Oct. 13 issue date.

The United States commemorative stamp honoring the National Museum of African American History and Culture will be issued Oct. 13, according to a news release from the U.S. Postal Service dated Sept. 26.

The nondenominated (49¢) forever stamp was originally scheduled for issuance Sept. 24, the 1-year anniversary of the museum, but the issue date was delayed by Postal Service officials in an Aug. 30 announcement.

The original issue date at that time had already been published in the Aug. 4 issue of Postal Bulletin, a fortnightly USPS publication that provides employees of the federal agency with procedural updates and additional information.

The Friday first-day ceremony for the new stamp will now take place at 8:30 a.m. at the museum, located on the National Mall at 1400 Constitution Ave., NW, in Washington D.C.

Entrance to the ceremony requires an online RSVP to usps.com/nmaahc and subsequent confirmation from the Postal Service. The confirmation will include additional instructions.

The event is standing room only, according to the Postal Service, and doors will open at 7:30 a.m. The Postal Service advises attendees to enter the museum through the 14th Street and Madison Drive entrance.

The stamp, offered in panes of 20, will be on sale at the ceremony, and in post offices nationwide on the same day.

“Opened on Sept. 24, 2016, the National Museum of African American History and Culture is the 19th Smithsonian museum and the only national museum devoted exclusively to African American life, art, history and culture,” the Postal Service stated.

“The museum’s collections, which include art, artifacts, photographs, films, documents, data, books, manuscripts and audio recordings, represent all regions of the United States and acknowledge the cultural links of African Americans to the black experience around the world as well. The museum provides opportunities for the public to explore and enjoy African American history while demonstrating the centrality of that history to our nation’s past, present and future.”