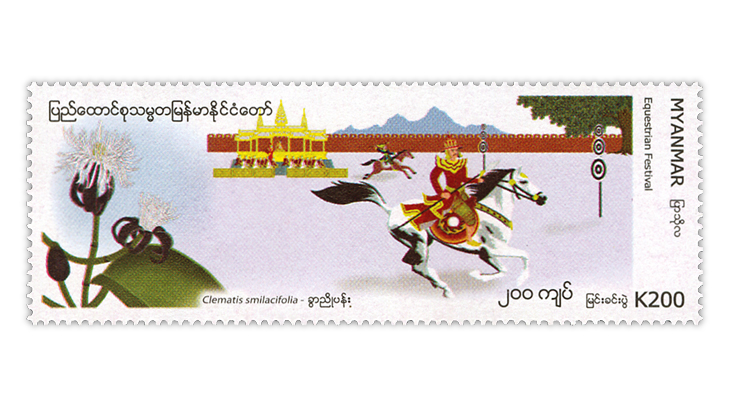 Myanmar is issuing a series of 12 stamps this year, one for each month in the traditional Burmese calendar. The series began Jan. 6, the first day of the month of Pyatho. 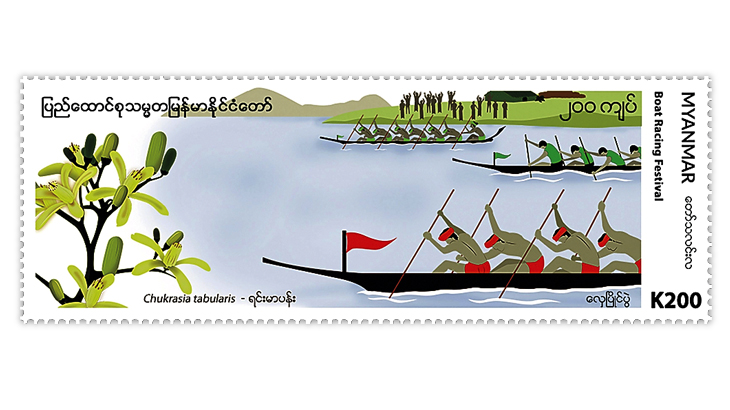 Myanmar celebrates the month of Tawthalin on a stamp issued Aug. 30, featuring a regatta festival and a flowering tree. Tawthalin is the sixth month in the traditional calendar. 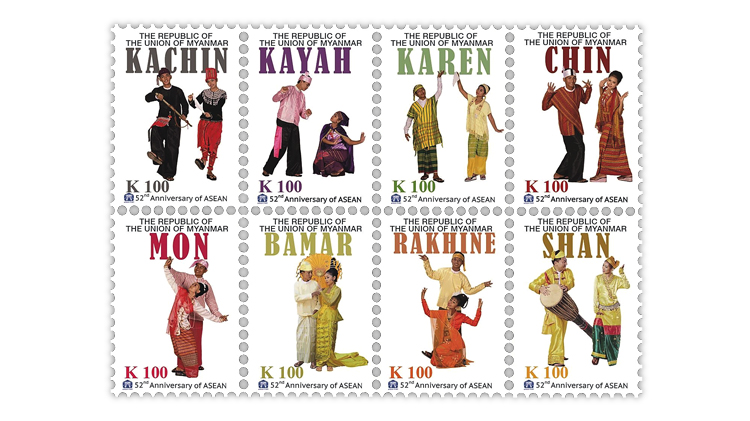 The costumes and dances of Myanmar's eight major ethnic groups are highlighted on these se-tenant stamps issued Aug. 16, part of the multination series of the Association of Southeast Asian Nations (ASEAN). 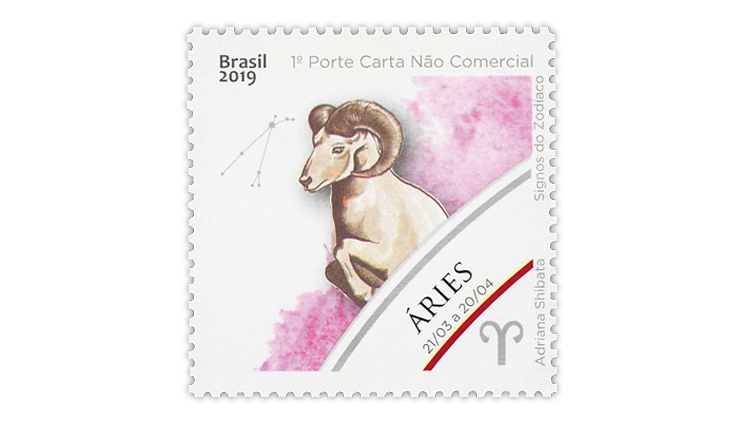 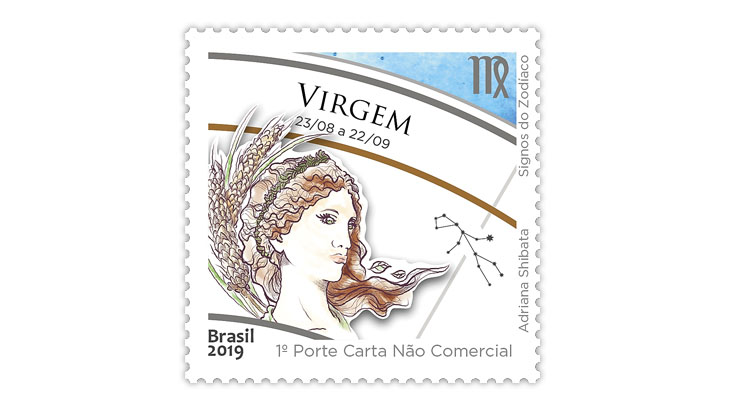 Each stamp in Brazil’s Zodiac series includes a diagram of the constellation. Virgo is the largest of the zodiac constellations. 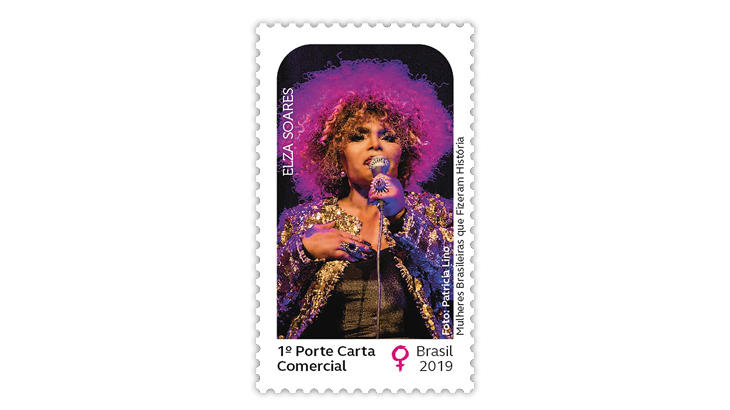 Brazil honors 82-year-old samba singer and songwriter Elza Soares on the first stamp in its Brazilian Women That Made History series. 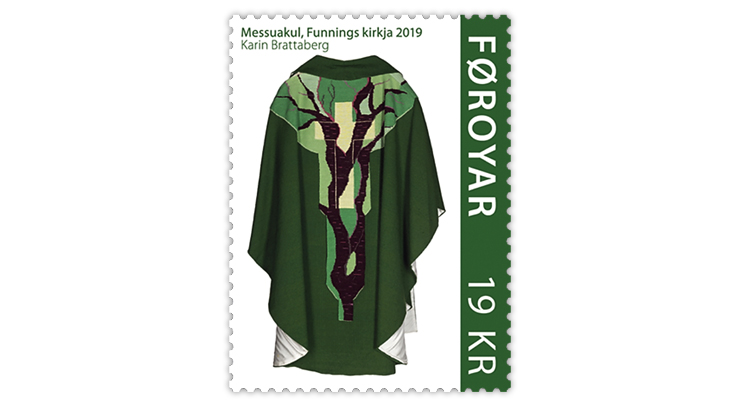 Stamps in a new stamp series of the Faroe Islands will present textiles of local churches. This 19-krone stamp issued Sept. 23 shows a handwoven chasuble (an outer garment worn by clergy) from a church on the island of Eysturoy.
Previous
Next

Myanmar is celebrating festivals, flowers and months of the traditional Burmese calendar on a series of 12 stamps this year.

A report by Jared Downing and Kyaw Lin Htoon on the Frontier Myanmar news site explains that most people in Myanmar use two calendars, "The internationally-adopted Gregorian calendar, and the Kawza Thekkarit, a traditional calendar that still marks religious days, state holidays and astrological conditions."

They added, "While the Gregorian calendar is measured by the sun, the Myanmar calendar is lunisolar, going by both the sun and the moon.”

The stamp series began Jan. 6 with a 200-kyat stamp featuring the royal equestrian festival and tropical clematis (Clematis smilacifolia). Both are associated with the month of Pyatho, which also started on Jan. 6 this year.

Wai Zin Paing designed all of the stamps in the series. He reportedly is a stamp collector and a member of the Burma (Myanmar) Philatelic Study Circle. The group, which is based in the United Kingdom, has members from around the world.

Myanmar’s Security Printing Works printed the stamps by offset in sheets of 30. The quantity printed of each stamp in the series is 150,000.

Myanmar has issued two other sets of stamps so far this year. Three stamps were issued Jan. 4 to celebrate the 71st anniversary of the national Independence Day. On Jan. 4, 1948, Burma declared its independence from Great Britain.

A set of 16 stamps issued Aug. 16 is part of the multination Association of Southeast Asian Nations (ASEAN) series with the theme of national costumes.

Brazil began a series of stamps in March featuring the signs of the zodiac.

The first stamp, issued March 21, highlights Aries, the ram. The design includes both a ram and a diagram of the Aries constellation. People born between March 21 and April 20 are considered to be Aries, and those dates are included in the design.

All of these Zodiac stamps are nondenominated, paying the basic domestic letter rate. Designed by Adriana Shibata, they were printed by the Brazilian Mint using the offset process and issued in panes of 24.

On July 23, Brazil introduced another new stamp series: Brazilian Women That Made History. The six-stamp series will include women who are living.

The first issue honors samba singer and songwriter Elza Soares. The symbol for women, also known as the Venus symbol, is included in pink below the photograph of Soares in concert.

A new series of stamps from the Faroe Islands focuses on textiles of local churches.

The two stamps issued Sept. 23 depict chasubles, outer liturgical vestments worn by Roman Catholic priests and also by some other members of the clergy, including Lutheran ministers in the Faroes.