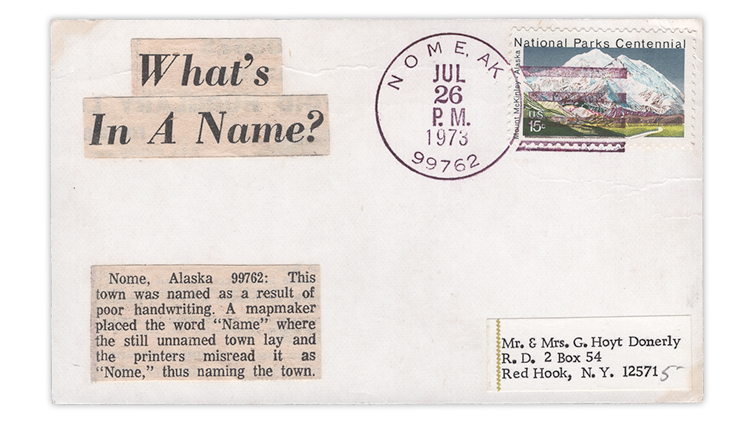 This 1973 postcard attributes the name of Nome, Alaska, to a mistaken interpretation of a naval chart, which turns out to be partially true.

Is the story on this postcard about the name of Nome, Alaska, true?

The brief story reads: “This town was named as a result of poor handwriting. A mapmaker placed the word ‘Name’ where the still unnamed town lay and the printers misread it as ‘Nome,’ thus naming the town.”

Turns out that the story is partially true. Eric Knapp, who edits the Alaska Collectors Club’s newsletter, Alaska Philatelist, sent me the entry from the Dictionary of Alaska Place Names by Donald J. Orth of the federal Department of the Interior, published by the Government Printing Office in 1967.

According to that publication, Nome was originally named Anvil City in 1898, derived from Anvil Creek, where the first major gold was found. By 1899, it had become Nome because of its proximity to Cape Nome, 12 miles southeast of the town.

The entry for Cape Nome in the Dictionary of Alaska Place Names reads in part:

“C(ape)Nome” appears on the 1853 British Admiralty Chart 2172. Its origin is generally attributed to an Admiralty draftsman‘s misinterpretation of “? Name” annotated on a manuscript chart constructed on board the H.M.S. Herald about 1850-52. The “?” mark was taken as a “C”, and the “a” was thought to be an “o.” This is the explanation given by the Chief Cartographer of the British Admiralty in 1900.”