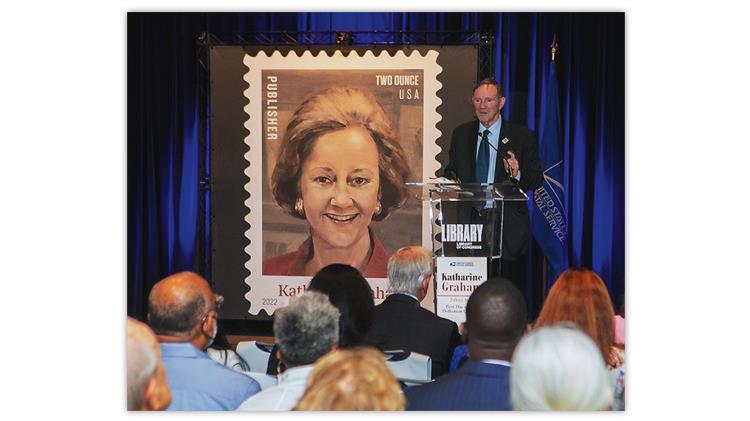 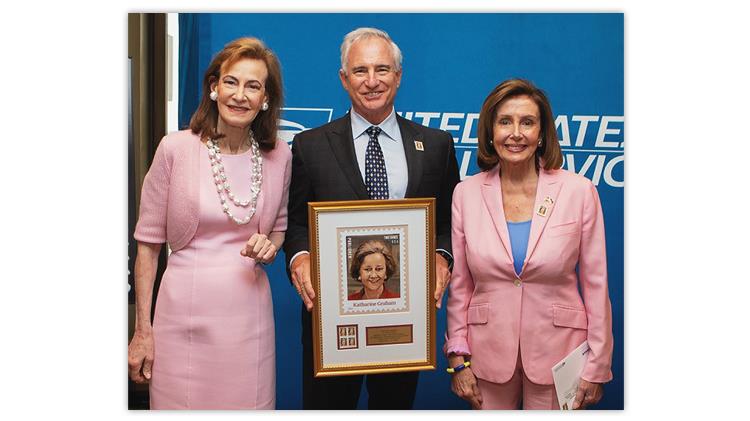 A number of notable people attended the first-day ceremony for the Katharine Graham stamp, including (left to right) her daughter, Lally Weymouth; her son Don Graham; and Rep. Nancy Pelosi, speaker of the House of Representatives.
Previous
Next

The June 14 first-day ceremony for the United States commemorative stamp honoring Katharine Graham resembled something like one of the A-list parties that Graham staged at her Georgetown mansion.

Rep. Carolyn B. Maloney, D-N.Y., chairwoman of the House of Representative’s Committee on Oversight and Reform, which oversees the U.S. Postal Service, also was there, along with who Graham’s son Don Graham described as “a lot of old friends of Katharine Graham.”

And the event that drew them to Capitol Hill included a contingent of her former Washington Post employees and not a few Washington, D.C., area stamp collectors.

“Twenty-one years after her death, it appears that Katharine Graham can still draw a good crowd in Washington,” the Washington Post’s Book Club newsletter quoted Don Graham as saying at the ceremony. “I am reduced to asking how my mother would have felt about being on a stamp,” he said.

“There are moments that I feel perfectly confident about what my mother would have said,” Graham said. “This is not necessarily one of them, but my belief is she’d have loved it.”

All assembled at the Madison Building of the Library of Congress the evening of June 14 to welcome a new 2-ounce- rate forever stamp in the Distinguished Americans series celebrating Graham and her remarkable career.

By the time of her death in 2001, she had established the Washington Post as one of the nation’s premier investigative newspapers, and she had led it through battles over the publication of the Pentagon Papers, and the Watergate scandal.

The gathering at this rare 6 p.m. first-day ceremony made clear that Graham is viewed as a heroic figure celebrated by members of both of the two main political parties and by conservatives and liberals alike.

The ceremony, over which Don Graham presided, saw lots of praise for Katharine Graham’s pioneering role as both a publisher and chief executive of a major corporation, the Washington Post Co.

“Katharine Graham was a trailblazer — the first woman to head a Fortune 500 company, and the first to serve as a director of The Associated Press,” said Donald Moak, a member of the U.S. Postal Service’s board of governors.

Moak also reminded the audience that Graham refused “to bend to unprecedented political pressure” during the Pentagon Papers episode and Watergate, the two crises that built her reputation.

Don Graham was modest about what he and his sister, Elizabeth “Lally” Graham Weymouth, had said at the event.

“I think the only important thing we said was thank you,” he told Linn’s Stamp News in an email. “The USPS folks could not have been kinder.”

Don Graham also said that he suspects that “KG’s old friend,” professor Henry Louis Gates Jr. of Harvard University, may have first raised the possibility of a stamp for Katharine Graham while Gates was serving on the Citizens’ Stamp Advisory Committee.

Gates said he had pushed for the Graham stamp along with Katherine Tobin, a current CSAC member. Gates served on the committee from 2005 to 2017.

Don Graham said his sister had represented the family in selecting the image of their mother that appears on the stamp. She chose a painting by Lynn Staley based on a photograph taken at the peak of Katharine Graham’s influence.

The ceremony was the second major stamp event in June in the nation’s capital.

Postmaster General Louis DeJoy participated in both the Graham event and the June 6 White House unveiling of the Nancy Reagan forever stamp to be issued July 6.

Graham is the 17th person to be honored with a stamp in the Postal Service’s Distinguished Americans series.