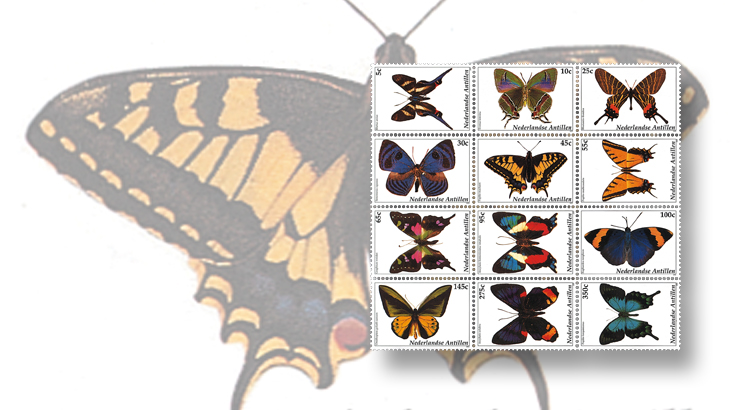 The Netherlands Antilles 2003 block of 12 Butterfly stamps (Scott 1005) is in demand in mint never-hinged condition and selling for multiples of its Scott catalog value.

On Oct. 10, 2010, Netherlands Antilles became a dead country. Its constituent islands were reorganized as Caribbean Netherlands, Curacao and St. Maarten.

On April 23, 2003, Netherlands Antilles issued a set of 12 se-tenant Butterfly stamps (Scott 1005). The stamps were printed in sheets of 24, as two blocks of 12 separated by a central gutter.

There is strong and steady demand for this block of 12 stamps, because butterflies are one of the most popular topics in stamp collecting.

Mint never-hinged blocks of 12 are selling in the $40-to-$50 price range. If you find a pane selling for anywhere close to Scott catalog value, it would be a real steal.