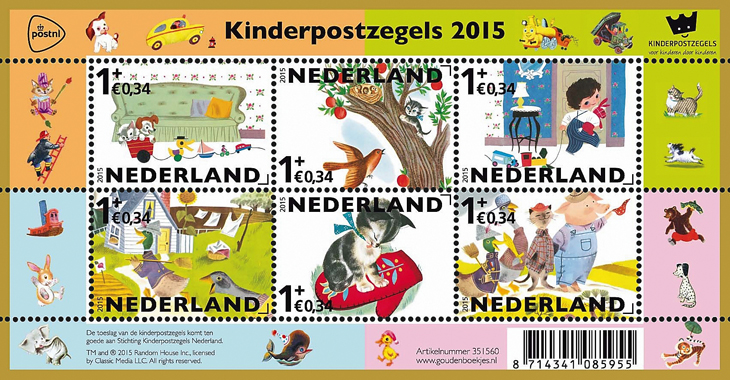 Little Golden Books are honored on the Netherlands’ semipostal stamps for the Foundation of Children’s Welfare Stamps. The stamps were issued Nov. 2.

Each year, schoolchildren in the Netherlands sell postage stamps to raise money for the Foundation of Children’s Welfare Stamps (Stichting Kinderpostzegels Nederland), a charity that works to support the development of vulnerable children.

This year’s semipostal stamps feature Little Golden Books, a series of books for children that were introduced in 1942.

According to Random House Kids, the first books sold for 25¢ each and were an instant success, with 1.5 million copies printed five months after they were introduced. Since then, more than 2 billion Little Golden Books have been sold around the world.

The six semipostals in the Netherlands’ pane show images from Katie the Kitten, The Little Red Hen, and Baby’s House. These stories were selected because they exemplify the foundation’s goal of giving children a safe home, according to a press release from the Netherlands’ PostNL.

Ludo Voorn, managing director of marketing at PostNL, said: “We support the Foundation for Children’s Welfare Stamps Netherlands’ initiative every year to give vulnerable children a better and brighter future. This year, the Children’s Welfare Stamp design also symbolises a safe home for every child. It’s a nice sentiment that one can think of when using these stamps to send a letter or card.”

Characters from other books in the series are pictured in the selvage.

Julius Vermeulen designed the stamps. Cartor Security Printing printed them by offset in a quantity of 3.77 million panes. Each stamp is nondenominated, with a “1” for domestic mail and a €0.34 surtax.

Schoolchildren began taking orders for these semipostal stamps Sept. 23. The stamps were issued Nov. 2, and the children started delivering them two days later.

The Netherlands PostNL reports that more than 180,000 10- to 12-year-old schoolchildren collectively raised €9.5 million (more than U.S. $10 million) through the sale of these stamps.

For more details about these and other Netherlands stamps, visit the Netherlands online shop.