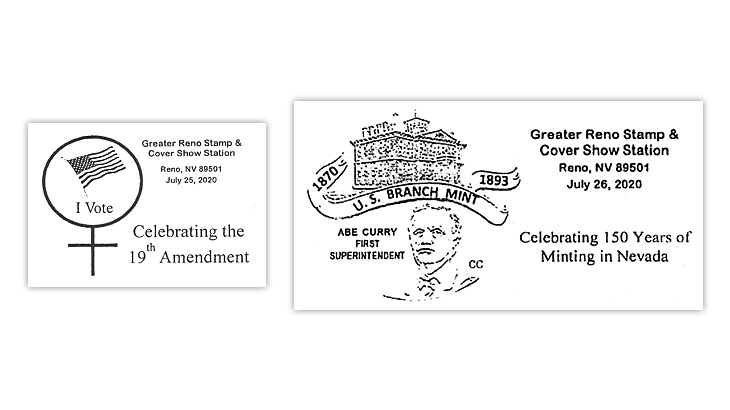 Even though the Greater Reno Stamp and Cover Show was canceled, the organizers are sponsoring two cancels honoring monumental anniversaries.

The Nevada Stamp Study Society has canceled its annual stamp show for 2020, but the show organizers have sponsored the two pictorial postmarks pictured here.

The Greater Reno Stamp and Cover Show was slated for July 25-26 but was called off because of the COVID-19 pandemic.

The July 26 cancel honors 150 years of minting in Nevada. The design depicts Abe Curry, the first superintendent when the Carson City, Nev., mint opened its doors in 1870.

The show’s July 25 cancel celebrates 100 years of women’s suffrage in the United States.

August 2020 marks 100 years since the 19th Amendment was passed, granting women the right to vote. The long-fought battle for women’s suffrage in the United States began in the early 1800s alongside the anti-slavery movement.

The conversation went national when activists Elizabeth Cady Stanton and Lucretia Mott organized the Seneca Falls Convention in 1848. The women advertised the event as “a convention to discuss the social, civil, and religious condition and rights of women” in the local newspaper.

Spanning two days in a chapel in Seneca Falls, N.Y., the meeting gathered more than 200 women and ignited the movement. Women’s rights conventions were held annually thereafter as supporters persisted with the mission.

Decades later, on Aug. 18, 1920, Tennessee became the 36th state to ratify the suffrage amendment, securing the necessary two-thirds of the states to make it part of the U.S. Constitution.

For each cover submitted, include a note to specify which postmark should be applied.

Collect a postmark for this fabled American ballpark