New addition to list of living people on U.S. stamps 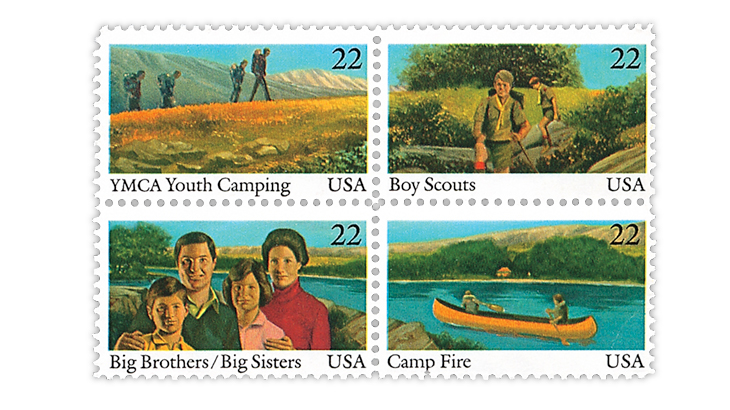 A new addition to the list of living people on U.S. stamps is the Big Brothers/Big Sisters stamp in the lower left of this 1985 International Youth Year block of four 22¢ stamps.

The subject of living people on U.S. stamps is endlessly fascinating. Over the years, this column has identified more than 75 U.S. stamps and 100 individuals who have been portrayed on stamps or were used as models for images of people shown in the designs.

Strictly speaking, this is a violation of a law dating back to 1866 that states that “… no portrait or likeness of any living person hereafter engraved shall be placed upon any of the bonds, securities, notes, fractional or postal currency of the United States.”

However, the U.S. Postal Service has interpreted the law to prohibit only the honoring of living persons, which it steadfastly maintains it never does.

A new addition to my list was recently suggested by Linn’s reader Gordon Duff, who pointed me in the direction of the 1985 Linn’s U.S. Stamp Yearbook, specifically the International Youth Year block of four 22¢ stamps (Scott 2160a). This block of four, which was issued Oct. 7, 1985, is shown here.

Dennis Luzak of Redding Ridge, Conn., designed the four stamps, and the Big Brothers/Big Sisters stamp at the lower left is modeled on a photo of a real family.

Duff knows the father in the family as a golf buddy and put me in touch with him.

The gentleman wished to remain anonymous, but he provided the following information: “Dennis Luzak and I are both alumni of the same university. We met by chance as members of the same country club. He asked if my family (Myself, my wife and our two children ages 11 and 13) would pose for his assignment.

“We posed in the order shown on the stamp for a photograph, from which he did the art work. Unfortunately, we never got a copy of the photo, and Luzak passed away some years ago. There was no publicity at the time and we were told to keep mum about it because of the USPS rules.”

The other three stamps in the block also contain images of people, although only those on the Boy Scouts stamp might be identifiable. To my knowledge, there is no information available as to whether there were photographic models for them.

If Linn’s readers know of any other instances of models used for stamp-design artwork, I would be delighted to hear from you by email at jmhstamp@verizon.net or by mail at Box 1125, Falls Church, VA 22041-0125.

If any reader would like a copy of my list of living people portrayed on U.S. stamps, I would be glad to send it in response to an email request. If you need a hard copy, please send 25¢ in mint postage and a stamped, self-addressed envelope by regular mail with your request.