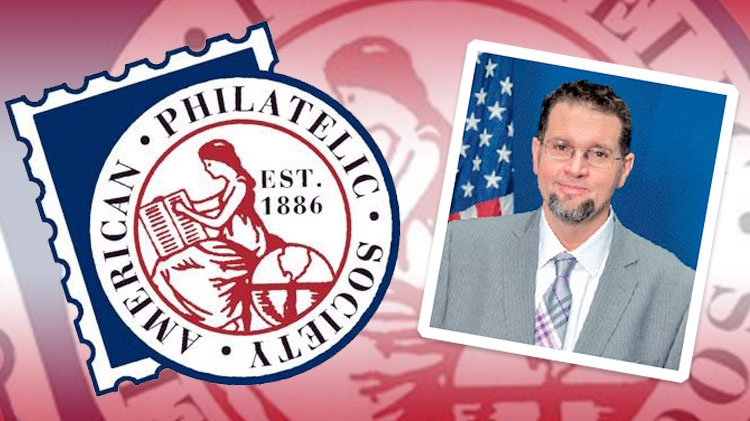 Scott English has been hired as the new executive director of the American Philatelic Society.

When his friend began talking about a job running the country’s biggest stamp organization, Scott English thought his friend wanted to know if he had any stamp collecting friends who might want the job.

No, the friend said, he wanted English, a well-known South Carolina political operative who doesn’t collect stamps, to apply for the executive director’s job at the American Philatelic Society.

English, 45, did just that, applying for a position that the APS had been unable to fill after months of searching.

On July 24, the APS announced that Scott English, chief of staff to a controversial South Carolina lawmaker, had won the executive director’s job without being a member of the hobby.

The key player, who excused himself from the selection committee deliberations once English applied, was former South Carolina superintendent of education Mick Zais, the head of the APS’s search panel.

Zais also is a member of the APS board of vice presidents.

“I knew he was growing weary of politics and was looking for a change,” Zais told Linn’s. “So I encouraged him to send in his application to the executive search firm that was working for APS.”

Others on the panel said English won the job on his own merits.

“My clear recollection is that you [Zais] recused yourself from the phone interview with Mr. English, did no lobbying on his behalf … and spoke last in the evaluation discussion after the on-site interviews,” recalled John Barwis, a search committee member, in an e-mail to Zais and Linn’s.

“My association with Scott was no secret,” said Zais. “But I felt it best if Scott and his record spoke for themselves.

“I was focused on finding the best candidate, not on getting a job for a friend.”

Several members of the search committee confirmed to Linn’s that Zais had not pressed for English’s appointment and had acknowledged his role in urging him to apply.

The search consultants had presented six names to the APS. The search committee narrowed it to three candidates to bring to Pennsylvania for interviews, but only two showed up after the third took another job.

In a July 26 telephone interview with Linn’s, English acknowledged he was not a collector but expressed much enthusiasm for the job he will assume Aug. 10.

“I see this as a great opportunity,” English said. “This organization is very healthy, and I’m honored to be chosen as its executive director. I see a very strong organization with a lot of potential.

“Look at my background. I have worked with large-scale management issues. … I bring a lot to the table although I’m not a collector.”

The APS board of directors decided that Ken Martin, the organization’s current director, had become overburdened by new tasks and needed to be replaced as the top executive, said APS director-at-large Kristin Patterson of San Jose.

There was also concern that the APS was continuing to lose members, at the rate of 1,000 a year. Continued losses at that rate could kill the society, Patterson said.

“I am hoping that having new blood will change a lot of things,” she said.

The job will be a major change from the role English has played for the past 22 years in South Carolina politics, where he was an aide to the state’s controversial former Republican governor and current representative, Mark Sanford.

He was also chief operating officer for the state department of education during Zais’ four years as the state’s top educator.

Calling South Carolina’s politics “the most brutal of games,” consultant Jeffrey Sewell, another former Sanford aide, said English had shown himself to be “the tame-master of the inevitable.”

During Sanford’s tenure as governor, he famously disappeared from Columbia, supposedly to walk the Appalachian Trail. It was later disclosed he had gone to see his mistress in South America.

English spoke only of how much experience he had gained while serving on Sanford’s staffs, first as a congressional aide in Washington and later in Columbia as his chief of staff and finally back as his chief aide in Congress.

When English returned to Sanford’s staff, Fitsnews, a South Carolina political website, nicknamed him “the Martyr for his slavish devotion to the scandal scarred politician.”

Having worked for Sanford at three different times, English said his departure from politics will probably surprise many South Carolinians.

“It was not my intention to make my career on Capitol Hill,” he said, saying he had last rejoined with Sanford “to help him bridge a gap” in his staff.

“As for his immediate goals with the APS, English said he wants to “dive in and get to know those people” in Bellefonte, Pa., where the APS is based.

“I don’t want to be premature,” he said, adding his initial goal will be to “work with the board, staff and membership.”

“I don’t want to sell the APS short,” he said. “It’s got a lot going for it,” saying he was impressed by the “passion for the hobby” exhibited by collectors.

A history graduate from the University of Maryland, English said moving to Pennsylvania will enable both him and his wife to be closer to their parents. The job should offer him a chance to spend more time with his teenaged daughter, he said.

One skill from his early days on the Sanford staff is “an understanding of the Postal Service,” he said.

Sanford was the vice-chairman of a House subcommittee that dealt with postal issues during his first term in the Congress, English said.