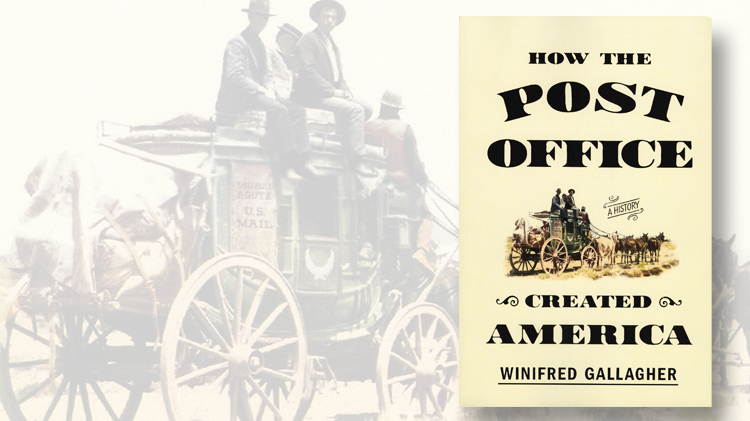 The title of Winifred Gallagher's new book might seem provocative to some. Nonethless, she makes a compelling case in this compact history that is both enlightening and entertaining.

“The history of the post office is nothing less than the story of America,” begins Winifred Gallagher in the introduction to her entertaining new book, How The Post Office Created America: A History.

While some might take this as a provocative assertion, Gallagher makes a compelling case by tracing the arc of the post office to show how it “made us the people we are.”

She begins, not surprisingly, with Benjamin Franklin and his profound influence on the development of postal communication in the British colonies.

She then goes on to trace the legal developments that transformed the post office from a small network catering to a select few into a much larger system that began to ride “the frontier’s constantly moving western edge.”

There were tough times during this period of expansion, and Gallagher efficiently recounts how the nation’s postal system almost collapsed under its own weight in the early 1840s, the victim of what she calls “the toxic combination of the troubled economy, the system’s relentless westward growth, and competition over pricing.”

In time, though, these obstacles were overcome, and by the 1850s, Gallagher notes, “average Americans” were able “to enjoy easy, back-and-forth personal correspondence for pennies.”

Also discussed are the pivotal roles played by the railroads and steamships, which helped move the mail with heretofore unimagined swiftness.

Gallagher’s recounting of what she calls the post office’s “golden age” is particularly engrossing.

During this 40-year period from 1880 to 1920, the post office’s “success in bringing more public services to many more people both supported and reflected an America that was tapping the riches of its vast West, moving to the center of the international stage, and exulting in its position as the world’s leading industrial powerhouse.”

Just as engaging are chapters highlighting financial and other challenges that confronted the post office in the years after World War II.

Gallagher concludes with a review of the U.S. Postal Service that emerged from the old Post Office Department in 1971.

“While America went online,” she observes, “the USPS and Congress kept improving and increasing what the people already called ‘snail mail.’ ”

And therein lies the challenge for the Postal Service: charting a path forward that keeps it relevant in people’s lives as the digital age marches on.

Or, as Gallagher puts it in her afterword, “Before deciding [the Postal Service’s] future, it behooves Americans and their representatives to reflect on what the post has accomplished over almost two-and-a-half centuries and what it could contribute in the years to come.”

Such reflections are indeed taking place, and Gallagher’s new book helps explain why such dialogue is so important to the Postal Service’s future — and, perhaps, ours.