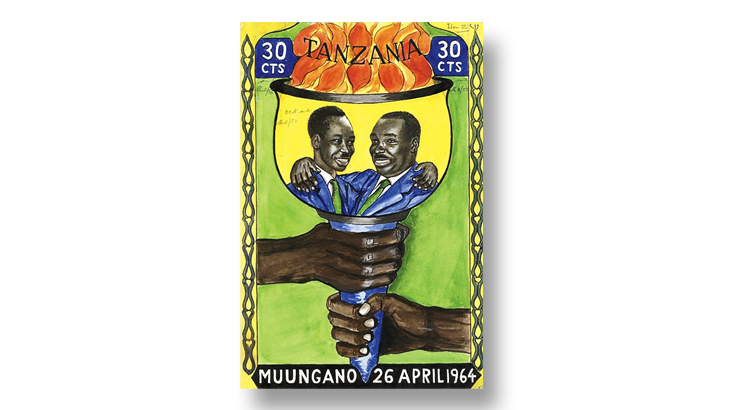 Jussa Ahmed, who was 15 at the time, created this essay of the 1966 Second Anniversary of the Union of Tanganyika and Zanzibar stamp (Zanzibar and Tanzania Scott 331) depicting President Julius Kambarage Nyerere and Vice President Abeid Amani Karume.

A new exhibit titled “Stamps, Independence, and Post-Colonial Futures” in the philatelic exhibition space at the British Library in London, England, opened in November and continues until the end of 2020.

The exhibit includes original stamp artwork from the Crown Agents Philatelic and Security Printing Archive, together with source photographs and proofs that were used in the design process. More than 600 unique and rare items are included in the display with most not exhibited before.

“The display demonstrates how stamps not only fulfilled their postal role, but how they also played an intimate part in the transition of Colonial territories into nascent independent countries, and how stamps were used to project the future aspirations of those countries to an outside world,” according to the British Library.

“The display addresses a broad range of topics including black history, cultural identity, graphic design and the history of printing as well as maintaining a strong philatelic content.”

The philatelic exhibition space is located on the upper-ground floor of the British Library, 96 Euston Road, London, England. For more information on the philatelic collection, visit its website.